History is about to be made at the upcoming eMotoRacing event near Salt Lake City.  For the first time in decades a streamlined motorcycle will race in a sanctioned event.  If you’re scratching your head and going “why’s that important” we have to ponder motorcycle racing politics, and the abysmal inefficiency of regular motorcycle design.

Until 1957 streamlined motorcycles were allowed in FIM sanctioned races.  That year the rules were changed to outlaw such bikes, leading to the sort of sport bikes now used in motorcycle racing around the world.

Yes, these bikes have a “fairing” and there is an efficiency difference between a naked bike and one with a fairing.  However, a motorcycle with full streamlining is clearly going to be far more efficient than modern sport bikes.  As I noted last fall when writing about Terry Hershner’s cross-country speed record attempt, Craig Vetter has run this test.  He’s taken two identical Ninja 250’s, added a fully streamlined fairing to one, then had riders take them on exactly the same route, at the same time, riding side by side, and compared the fuel efficiency.  The bike with the streamlined fairing had much higher miles-per-gallon of fuel.

The motorcycle shown above is an NSU SportMax from 1955, and with this motorcycle H-P.Müller won the world championship 1955 and Hans Baltisberger won the German road race championship.  The image comes from Wikimedia where it’s shared under Creative Commons CC CC-BY-SA 3.0.  The Wikipedia page on motorcycle fairings

is worth a read.

What’s going on with typical motorcycles is they aren’t designed for fuel efficiency.  Most motorcycles are designed to look like the superbikes running in motorcycle races.  And because the FIM bans streamlining in races, the superbikes cannot be streamlined, and therefore the guys who want bikes that look like the one which won the race on Sunday do not seek out a bike with streamlining when going to the motorcycle store on Monday.  Instead, the bike they get is less efficient, uses more fuel to achieve the same result (high speed), and humanity is saddled with a fleet of motorcycles on the road consuming more fuel than is required.

In theory, if riders in FIM sanctioned races were riding streamlined bikes, the motorcycle-buying-public will want to buy streamlined bikes, and humanity won’t have to burn as much fuel to power motorcycles.  Taking that reasoning to all other vehicles, introducing proper aerodynamics to all vehicles would mean an across-the-board fuel consumption decrease, with matching positive effects on a range of issues including peak oil, middle east geopolitics, the environment and climate change. 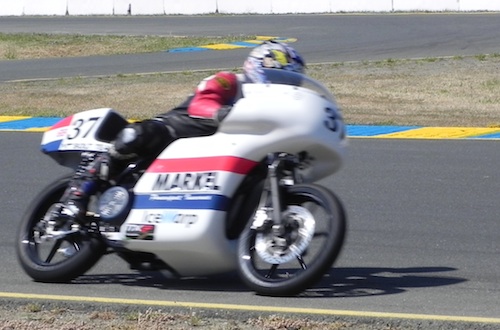 Those were the closest anybody came to a fully streamlined bike in TTXGP racing.  The first is Team Electra during the 2009 TTXGP event at the AMA Vintage Motorcycle Days event in Ohio.  The second is again Team Electra, but sometime during the 2010 season.

What about the history-making event mentioned earlier?

It turns out that in the Spring of 2014, Arthur Kowitz visited Craig Vetter.  Vetter has been working on motorcycle aerodynamics since the 1970’s, sponsored a fuel efficiency event in the early 1980’s, and more recently has sponsored another fuel efficiency series the last few years.  Kowitz is the instigator of the eMotoRacing series – which I’ve not been giving as much coverage as they deserve, I apologize but it’s been a crazy-making year for me.  In any case, Kowitz left Vetter’s place with a Vetter Streamlining Kit and set about adapting it to his Brammo Empulse TTX

With the kit adapted to the TTX, they took it to a track day at Roebling Road near Savannah GA.  Kowitz already had GPS data of the same bike on that track when eMotoRacing held an event there earlier in the year.  They were able to compare data with and without the streamliner, and adjust etc.

He reported that a couple turns were a little harder to manage, but there were no crosswind challenges.  He tells of another rider who tried to pass Kowitz, but found there was no “air wake” behind the streamlined TTX.  That’s with a stubbier tail than other bikes on which the Vetter Streamlining Kit has been installed.

The speed difference was minimal – only a 4 miles/hr top speed improvement.  But, Kowitz says the GPS data showed faster acceleration, and lap times were 2 seconds faster than in February.

Having proved the effectiveness of a streamlined fairing on the Empulse TTX, it seems Kowitz is planning to race with that combination in the upcoming eMotoRacing event in Salt Lake City.

You can see pictures and a full report on Craig Vetter’s website via the link above.  I, for one, am pondering my budget to consider whether I can make it to Salt Lake City for the race.