) – and modified it beyond belief to support nearly 200 miles on a charge, and a sub-1-hour charging time.  He’s about to set off on another of his cross-country trips, looking to ride from San Diego to Florida in under three days.

Out of the box, the 2012 Zero S had about 60 miles range at highway speed and took 8 hours for a full recharge.

With his bike, Terry Hershner has criss-crossed the country this year demonstrating that the combination of 150 miles electric range and fast charging means the freedom to ride/drive “anywhere”.

The last couple months he’s been working on further refinements with the intent to make another cross-country trip that will secure the record time for a cross country electric motorcycle trip.  Currently the record is held by our friends with Moto Electra, Brian Richardson, Thad Wolff, and crew.  Terry is looking to make the trip this time in about 2 1/2 days, but any trip under three days duration will snag the record.

How does it work? 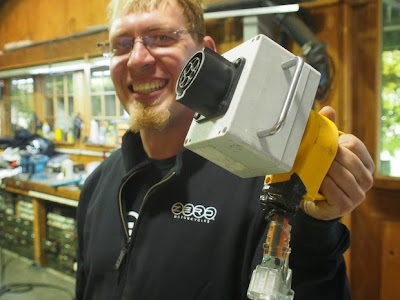 Another part of the system is a bag full of power adapters.  The one shown here converts a J1772 plug into a NEMA 14-50 outlet, which Terry then converts further to connect with the chargers. 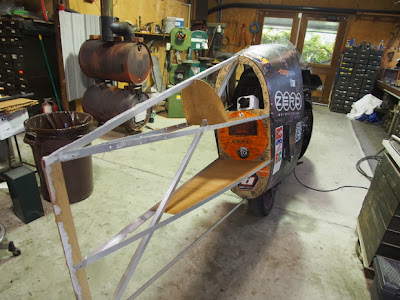 Another key is aerodynamics.  Terry has had the good fortune to meet Craig Vetter, a legendary motorcycle designer who has been developing motorcycle fairings for 50 years or so.

Over the last year they’ve set up a full fairing for his Zero S – the idea being to make the most use of the energy carried on the bike.  They estimate that half of the range extension comes from Terry having installed a larger battery pack on the bike – 18 kilowatt-hours versus 9 – and that the other half comes from aerodynamics.

Vetter told me that one test of his fairing involved two Ninja 250’s being ridden side-by-side, at the same speed, in the same air conditions.  One bike had his fairing while the other didn’t.  The Ninja 250 with the fairing had something like twice the fuel efficiency of the one that didn’t.

We believe that electric bikes need this much more than gas bikes do, because of limited energy storage.

For most of the year Terry had ridden with a fairing that ended in a blunt end.  That’s the wooden bulkhead you see in the picture above.  What they did over the last two-ish months is to design, fabricate, and install the tail section shown above.  Adding the tail improves air flow and increases efficiency even more.  The technology used is amazingly simple, just an aluminum frame with a simple skin, but it makes huge energy efficiency improvements.

Unlike his previous trips, this time Terry will have a passenger.  His friend Bun Bun will be riding behind him, helping him stay awake.  She’s the one wearing the second helmet in the picture below.

by Off The Grid