The hydraulic fracturing boom is causing water shortages and drying up towns in West Texas, and elsewhere.  Water is the source of life, and clean water means clean healthy life.  The fracking process, as it’s popularly known, consumes massive amounts of water.  This is water that the oil well operator mixes with frack chemicals, then pumps underwater to cause rocks to fracture and release the oil or gas.  Many people are concerned with the effects this has on ground-water, or on air pollution, but water resources are already tight, with many areas unable to supply the fresh water demanded by ever-growing populations.

The purpose of fracking is to continue feeding cars with gasoline, trucks with diesel, and homes with natural gas.

Each of those fuels are fossil fuels.  The use of those fuels increases the quantity of carbon in the ecosphere, which is feeding concerns over global warming.  However there are side effects from the extraction and refining process of each of these fuels.  The focus on carbon etc is important, but to overly focus on that one symptom will miss all the other symptoms and perhaps miss solving the bigger problem.

With that in mind let’s take a look at the impact of hydraulic fracturing on water supplies.

This is a story about West Texas small towns whose water wells are running dry. Beverly McGuire is quoted saying: “The day that we ran out of water I turned on my faucet and nothing was there and at that moment I knew the whole of Barnhart was down the tubes. I went: ‘dear God help us.’ That was the first thought that came to mind.”

West Texas has, of course, always been a dry place.  The story says they’ve had 3 years of drought, decades of overuse, and now Fracking causing a big increase in water use.  Climate change is making it worse.  Aquifers and reservoirs are running low.  Etc.  In Texas, 30 cities could run out of water by the end of 2013.

Ranchers have had to cull their herds, cotton farmers have lost half their crops. A rancher, Buck Owens, is quoted saying “They are sucking all of the water out of the ground, and there are just hundreds and hundreds of water trucks here every day bringing fresh water out of the wells.”

Another: “I’ve got dead trees in my yard because I haven’t been able to water them,” said Glenda Kuykendall. “The state is mandating our water system to conserve water but why?… Getting one oil well fracked takes more water than the entire town can drink or use in a day.”

Someone who is selling water to the frackers says: “If you’re going to develop the oil, you’ve got to have the water,” said Larry Baxter, a contractor from the nearby town of Mertzon. The economics of it are that his well can fill 20-30 trucks a day, at $60 per truck, earning him an easy $36,000 a month. “People use their water for food and fibre. I choose to use my water to sell to the oil field,” he said. “Who’s taking advantage? I don’t see any difference.”

New Report: Fracking Could Cause a New Global Water Crisis

– March 7th, 2012 – Is a report by Food & Water Watch who is presenting Fracking as a major threat to water supplies.  According to the report, Fracking: The New Global Water Crisis, countries around the world are grappling with how to address the push to drill and frack.

The oil and gas industry touts the economic benefits of fracking, but the report counters that any economic benefit to local communities is short lived and can be outweighed by the risks and costs of the industry. Employment, construction, housing demand and royalty payments may increase significantly during an initial boom, but these effects diminish quickly as well productivities decline and operations move elsewhere, leaving behind a costly legacy of environmental pollution and scarred landscapes.

“While the oil and gas industry is profiting off of this technology, it has been a disaster for Americans exposed to its pollution. They have dealt with everything from mysterious ailments likely caused by hazardous air pollution to well water contamination that has left rural communities unable to use their water for washing, brushing their teeth or cooking—much less drinking,” said Hauter. “Does the rest of the world want to live this nightmare?”

– Is a report about the effects on water supplies from fracking in the Marcellus Shale.  It starts with this:

In 2009, eighteen households in Dimock, Pennsylvania had their well water contaminated after a natural-gas-extraction accident in the Marcellus Shale. In September 2010, the federal government found that Encana, a natural-gas operation making use of the same drilling techniques now being used in Pennsylvania to remove natural gas from the Marcellus Shale, contaminated the water supply of a Wyoming town so badly that residents were advised not to shower without proper ventilation. Perhaps disasters like these influenced the American Rivers organization’s decision to put two of Pennsylvania’s largest rivers on its 2010 annual list of the ten most endangered rivers in the United States. On its list, American Rivers named the Upper Delaware River America’s most endangered river, in addition to ranking the Monongahela River America’s ninth most endangered river. The stated basis for both of these dubious distinctions was each river’s location within regions of Pennsylvania experiencing increased natural-gas activity on account of their position above the Marcellus Shale.

The report introduction goes on to say that in order to get enough water for frack jobs, the operators are making “impermissable” uses of rivers, and some of Pennsylvanias streams have already gone dry.  This is on the East Coast where there is plentiful rainfall, unlike the climate in West Texas which is historically dry as a bone.

Complicating the situation is that Pennsylvania has no authority to regulate withdrawal of water.

About 2/3rds of Pennsylvania sits on the Marcellus Shale, and geologists have known about it for over 80 years.  It wasn’t until the Energy Crisis in the 1970’s that they took a serious look at its resource and determined a total amount of between 50-500 trillion cubic feet of natural gas.    However because of the geology normal vertical drilling wouldn’t work..etc..etc.. the paper goes into a lot of details about the facts of hydraulic fracturing.

It also covers Pennsylvania water laws .. as well as recommendation for procedures for permits.

.  Previously, the state gave blanket permission for natural gas wells, and made no attempt to regulate gas emissions.  But these wells are known to cause methane emissions into the atmosphere (natural gas is essentially methane – a stronger greenhouse gas thingy than carbon dioxide), and the frack chemicals also put other toxic gasses in the air.

Hydraulic Fracturing and Water Resources: Separating the Frack from the Friction

What is fracking’s role in Weld County water shortage?

– A letter to the Editor of the Denver Post.  They’d run a story about ranchers worried about water about to run out.  The letter writer notes there is complex issues around water rights etc, but asks to know more about the tremendous amount of water used in Fracing operations since Weld County has over 18,000 such operations.

Hydraulic Fracturing and Water Use: Get the Facts

: This is from the Heartland Institute – a right wing think tank – and presents a different point of view.  Namely that this is good for jobs and produces a lot of benefit.  And that the water consumption is less than uses like irrigation.

) where they’re moving to use recycled water or even saltwater for frac jobs.  Halliburton is the largest provider of hydraulic fracturing services in the world.  Their goal is to cut water use in these operations by 25% by the end of next year.

:  March 2013 report on ThinkProgress –  “As the level of hydraulic fracturing of oil and gas wells in the United States has intensified in recent years, much of the mounting public concern has centered on fears that underground water supplies could be contaminated with the toxic chemicals used in the well-stimulation technique that cracks rock formations and releases trapped oil and gas. But in some parts of the country, worries are also growing about fracking’s effect on water supply, as the water-intensive process stirs competition for the resources already stretched thin by drought or other factors.”

– is an EPA study proposal on what it says.  Contains a lot of useful information, and these research questions are important to ponder:

– is a fact sheet by Clean Water Action going over proposed legislation in California requiring ground water quality monitoring before and after hydraulic fracturing operations.

Could Fracking Trigger a Beer Crisis in Europe?

– a May 2013 article about a concern being raised in Germany about how hydraulic fracturing could doom Germany’s beer industry.  Germans have a purity law requiring that beer makers use only malt, hops, yeast, and water, to brew their beers.  But the effect of fracking on ground water may render the water unusable. 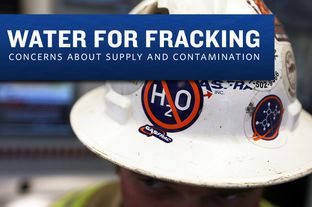 Report warns of water depletion due to fracking

: A report from April 2013 on the Bakken Today website .. starts with this:  “DICKINSON, N.D. – A scathing report issued Thursday by the Western Organization of Resource Councils says water used in the process of hydraulic fracturing, or fracking, is reaching a crisis point in Western states. The regional network of organizations’ 37-page report, titled “Gone for Good,” warns of continued diminished water supplies in areas that have been hit hard by drought in recent years. The report also states that the data currently available and processes used to track energy industry water used for fracking are not sufficient, and that the “current level of water use for oil and gas production simply cannot be sustained.””

– A July 2013 report on the National Geographic website goes over findings reported in Science that the disposal of waste water from Frack jobs (Produced water) is linked to triggered earthquakes.  This water is often pumped underground.  The increase in underground water lubricates rock formations causing them to be more susceptible to earthquakes.  So, when a large earthquake occurs elsewhere, the lubricated rock itself gets triggered with an earthquake.