Yamaha, in their 2013 Annual Report, announced production of the Yamaha PES1 and Yamaha PED1 electric motorcycles would begin in 2016.  While these aren’t electric superbikes, this will make Yamaha the first major motorcycle manufacture to begin building electric bikes.  Further, it’s a step towards a full-on electric superbike that Yamaha hinted a few years ago would be available in 2020.

when Yamaha announced low scale (1000 units a year) production of a low end (26 miles/hr) electric scooter, the EC-03, the press release said the EC-03 was just the first step of what Yamaha expected would usher in a full line of electric motorcycles by 2020.  This line would include a “high output” model.  Given Yamaha’s role in the motorcycle world, it’s fair to assume Yamaha was hinting an electric superbike by 2020.

Most of what we know about the PES1 and PED1 comes from the 2013 Tokyo Motor Show, where these bikes were shown

, along with and several other electric scooters and bicycles.

Let’s take a look at everything Yamaha showed last fall to get a sense of where they’re going.

What I see is the company looking to reuse components on more than one bike.  That’s a wise move letting them reuse engineering investments to fill out the model line.  But is it resulting in lower power?  Is the PES1 limited by a drive train meant for dirt bikes?

Some of these vehicles are underpowered, uninspiring, or even confusing.  The electric bicycle doesn’t make sense to me with nearly 20 years of experience riding electric bicycles.   It looks like a high end race bike, with aerodynamic wheels and seat/handlebars set up for a serious racer.  Why would a serious racer want electric assist?

The Yamaha PES1 is a street bike of the same ilk as the Zero S.  Except it has less useful functionality.  Where Zero puts a “tank” that can either hold cargo or additional battery pack, Yamaha put a swoopy piece of stuff that serves no function other than a resting place for riders in full tuck.   And where Zero put in a rear seat, the PES1 will only seat 1 rider.

The Yamaha PED1 is a dirt bike.  The design is very spare, which makes sense for a vehicle meant to romp around on muddy paths.

Both of these bikes have a transmission that’s switchable betwen Automatic and Manual.  In last fall’s announcement, Yamaha said these bikes “retain the same operational feeling that current motorcycle riders are used to”.  Brammo said a similar thing when at the Brammo Empulse unveiling party in May 2012, that the Empulse has a transmission because it offers familiarity to current motorcycle riders.

I don’t want to rathole into controversy, it’s just interesting to see the same explanation from two companies.

The “power unit” (the Yamaha Smart Power Module) is common between the PES1 and PED1.  It has a rigid structure that’s part of the motorcycle frame, rather than being carried inside the frame.

There’s nothing about speed or range or charging time.

Also shown last fall was the eVino, an electric version of the Yamaha Vino scooter that in turn is inspired by the Vespa.

This is meant for urban commuting travel, meaning it has a modest speed and range.  There are already plenty of scooters like this on the market, with top speeds in the 30-40 miles/hr range and a 20ish mile range.  The eVino supports a removable battery pack.

The EKIDS is a dirt bike for youngsters.  Several companies make similar products already.  In the picture I spy what looks like an electric bicycle battery pack – the sort that is a longish rectangular tube containing batteries, and meant to be easily removable for off-board charging.  The drive unit appears to be at the rear wheel.

The power unit is the same as on the eVino. 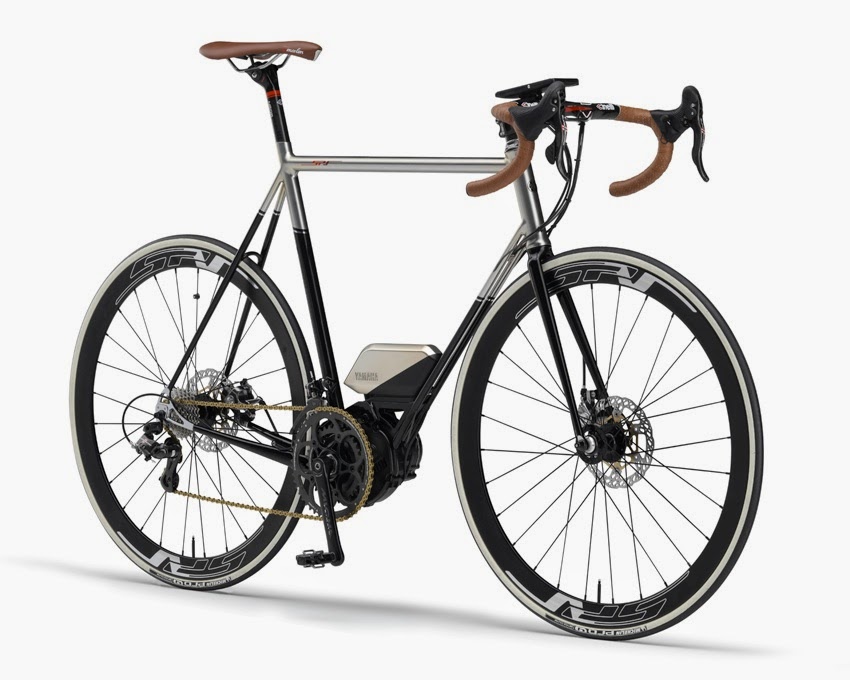 The YPJ-01 is an electric bicycle hearkening back to one Yamaha showed 20 years ago.  I don’t understand the thinking to building what looks like a high end race bicycle, but with an electric motor.  To me (I’ve been riding electric bicycles since 1995) electric bicycles are about utility, not goosing up the speed of a race bike.  I would imagine serious race bike people aren’t interested in an electric drive for anything other than occasional speed assist, such as hill climbing.

The YPJ-01 has a mid-drive system, meaning the motor drives into the rear wheel gearing and therefore the rider gets lots of flexibility in power/effect ratios.  Even though it has a 250 watt motor, it will still be pretty speedy because of this.

The battery pack looks pretty small, so don’t expect much from the range.  Maybe Yamaha does mean this to be solely for little speed boosts now and then? 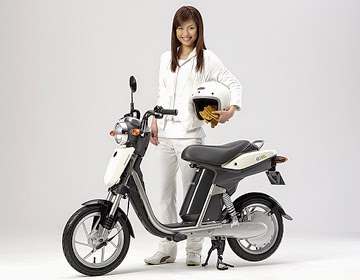 Since I’m going over the known electric bikes from Yamaha, here’s the EC-03 from their announcement in 2010.

This vehicle has a top speed around 26 miles per hour, and is (or was) in very low production, about 1000/year.

There are several similar low end scooters on the market from other makers.