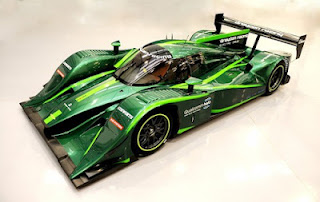 Drayson Racing recently set a land speed record of 204.2 miles/hr average speed over a measured mile at the Elvington Airfield, in Yorkshire.  However that track wasn’t long enough for them to fully test just how fast the Drayson B12 69/EV can go because they had to start braking while the car was still accelerating.  As a result the team is taking a trip to … Bonneville.

They’ll be at the Bonneville Speed Shootout for the next few days (Sept 12-18).  This event is a chance to set FIA certified world land speed records.  Drayson Racing is aiming for the sub-1000 kilogram electrically powered class.

10 September 2013 : Technology entrepreneur, former UK science minister and racing driver Lord (Paul) Drayson is bringing his spectacular Drayson B12 69/EV electric Le Mans Prototype racing car to the Bonneville Salt Flats in Utah in an attempt to raise the sub-1000kg electric car world land speed record.
Drayson Racing achieved a 204.2mph average speed (subject to FIA homologation) over the measured mile earlier this summer at Elvington Airfield in Yorkshire, UK, and is aiming to go even faster at the much longer Bonneville track.
By running in the sub-1000kg electric vehicle land speed record class, the team is aiming to demonstrate the future possibilities of EV technology and performance and to highlight the importance of lightweight in future electric car design.
It’s the latest challenge to be undertaken by the pioneering electric motorsports firm, which has been at the forefront of sustainable racing since 2007 and was first to sign up for the new FIA Formula E championship having been scientific advisers to the series.
The car is scheduled to run at the Bonneville Speed Shootout (Sept 12-18) where the fastest cars and motorcycles in the world aim to establish new FIA and FIM certified speed records. Lord Drayson, who will be aiming to top a previous sub-1000kg electric car best, is aiming to push the 800bhp B12/69 EV to its maximum possible speed during the US attempt.
Said Lord Drayson, founder and CEO of Drayson Racing Technologies: “We are delighted to be invited to Bonneville and to be racing on the West Coast – without doubt the spiritual home of the electric vehicle.”
“Back in June, the relatively short runway at Elvington limited our top speed as we had to brake as the car was still accelerating. We are looking forward to discovering just how fast the car can go on the wide-open spaces of the Bonneville salt flats, although its been a major engineering challenge to prepare the car for running on salt.“
“The development of lightweight car technology is a key part of the drive to bring electric cars to market with the range and performance that consumers expect. That is why we are focused on the sub 1000kg category for the EV world record. It presents the greatest technical challenge to engineer a car that weighs under 1000kg, goes over 200mph and is purely driven by sustainable electric energy.”
One of the team’s major backers and supporters is San Diego based, Qualcomm, a leading provider of wireless technology and services. The Drayson B12 record car incorporates Qualcomm’s pioneering Wireless Vehicle Electric Charging (WEVC) system that uses inductive wireless energy transfer to eliminate the plug-in cord used in most electric cars today.