Nissan is definitely heading to the 24 Hrs of Le Mans Garage 56, in 2014, with an electric race car. The Nissan ZEOD RC, for Zero Emission On Demand Racing Car, is being designed for drive train flexibility to use both electric motors, battery packs, and petrol engines in different ways with simple reconfiguration choices.  The ZEOD RC is not a 100% battery electric race car, because obviously at this stage of EV drive trains no such car could handle a 24 hours endurance race.  Instead Nissan see’s the ZEOD RC as a test bed with which to “test the potential” of their future LM P1 power train.

Nissan’s goal is to return, in the future, to Le Mans P1 competition, and gaining overall wins using an electrified LM P1 drive train.  The first step is the ZEOD RC, with a 300 km/hr top speed, slated for the 2014 Le Mans race via Garage 56.  That garage is reserved for experimental technology vehicles such as the 2013 hydrogen fuel cell entry, the GreenGT, which unfortunately pulled out 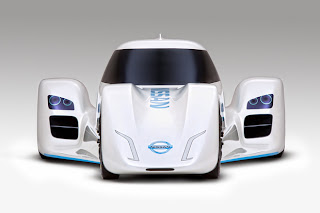 To aim for winning Le Mans overall with an electrified drive train is a big goal.  We like that.

Since the ZEOD RC isn’t a 100% battery electric car, then what is it?  In a press conference to unveil the car, a Nissan representative talked about how in some ways regular road cars are ahead of race cars – turbo-charging technology has been downsized and applied to smaller engines, not for high performance but for higher efficiency – electric cars, like the Nissan Leaf, are on the market and slowly ramping up sales. 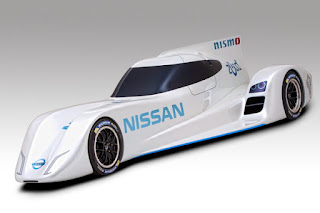 Reading between the lines of his statement, the ZEOD RC will use a combination of a small turbo-charged fuel efficient engine, coupled with an all electric drive train with a battery pack.  The exact details have not been announced yet, because Nissan has not finalized the design.  Instead, they’re at the beginning of the design work, and has “a number of other ideas under development that will be looking to test in the chassis” according to Andy Palmer, Executive Vice President of Nissan Motor Corporation. 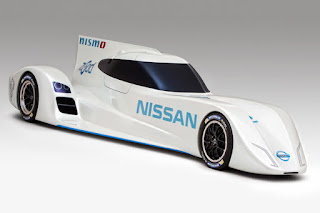 Ben Bowlby, Nissan’s Director of Motorsport Innovation, positioned the ZEOD RC in contrast to the hybrid cars Audi and Toyota are racing in the FIA World Endurance Cup.  Both those cars have been beating the pants off the competition, and are using hybrid technology, but with a KERS system rather than a hybrid electric system.  That means Audi and Toyota are using a form of regenerative braking that mechanically captures kinetic energy, releasing bursts for acceleration out of corners.  The ZEOD RC instead is an electrified system, that will capture energy during braking etc, but do so electrically rather than mechanically. 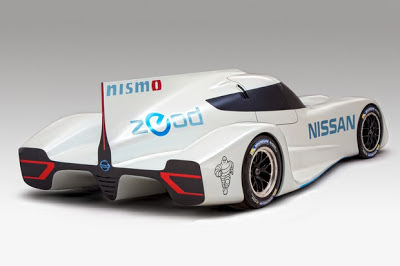 Bowlby said “We’re building an extremely flexible platform with which we’ll be able to try multiple different options – even during the same multi-day test.  It is about experimenting and gathering data to work out how we use electricity to develop a competitive LM P1 program in the future.  We will be working very closely with the ACO throughout the test program to help develop where this technology fits within the Le Mans rules package.”

They expect to be able to run laps at Le Mans faster than a Ferrari GT car, which will be quite an achievement.  That means less than 4 minutes a lap.  There is no track record for electric cars at Le Mans, so anything Nissan does with the ZEOD RC will set the Le Mans electric car track record. 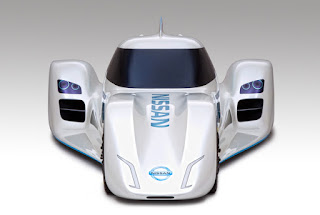 The car shown at Le Mans is based on the Nissan DeltaWing.  It has a narrow front end, and a wing-like shape (hence the name).  That car occupied Garage 56 in the 2012 24 Hrs of Le Mans.

The electric part of the drive train is to use similar components (but not identical components) as are used in the Nissan Leaf.  That means similar battery, inverter and motor technology but beefed up for the rigors of 300+ km/hr at Le Mans.

They aim to use the ZEOD RC as a test bed to develop these technologies, not just for a future electrified LM P1 race car, but for application to commercial electric cars sold to the public. 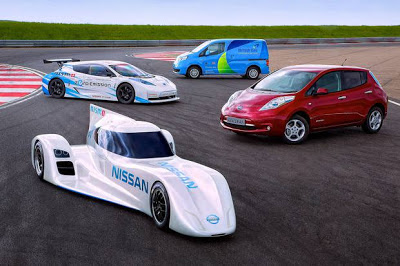 With the Nissan Leaf having sold over 65,000 units world-wide, Nissan rightly see’s themselves as a world leader in electric cars.  The growth rate for sales of the Leaf is outstripping the first years of Toyota Prius sales by a good margin.

The theory presented by Nissan management is that by applying the same technology to race cars, they’ll drive more awareness of electric drive train capabilities, while using the race track to accelerate technology development.  We totally agree with this theory, because that’s the exact purpose I personally have for focusing on electric racing news. 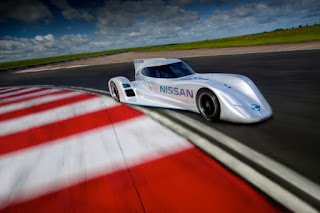 “Nissan has become a global leader in the development of zero emission automotive technology, and the Nissan ZEOD RC will allow us to further develop those capabilities using the toughest endurance race in the world as a mobile test bed to test the potential of our planned LM P1 power train,” said Andy Palmer, Executive Vice President and Executive Committee member at Nissan Motor Company Limited.

“The Nissan ZEOD RC is a natural progression that follows on from the development of the Nissan LEAF road car and the LEAF RC race car prototype. The technologies developed through the ZEOD RC program will form part of future innovations for Nissan road cars. 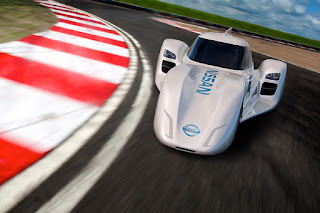 “Nissan is already a global leader in the sale of all-electric cars and we’re eagerly awaiting the opportunity to showcase the lessons learnt with the development of battery technology in the world’s oldest, toughest and most high profile endurance race.

“The ZEOD RC program is designed to develop multiple technologies to evaluate how they could be used for a future LM P1 class return of Nissan at the Le Mans 24 Hour. There are multiple options we are investigating. A Zero Emission on Demand option where the driver can switch between electric and petrol-powered drive is a future direction for road cars, so that will be tested in addition to pure electric power and other new technologies that we still have under development. 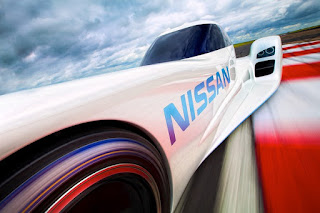 “As no other manufacturer is using electric battery technology in endurance racing today, Nissan is innovating again and this will provide us with significant amounts of data and information to evaluate potential powertrains for future sportscar programs and allow us to continue as the leader in Zero Emissions technology on the road.”

“Developing a car like this provides an incredibly challenging test bed for what could be highly effective options for road cars of the future. Throughout the next twelve months we will be testing multiple drive train options in an extensive test program,” Bowlby said. 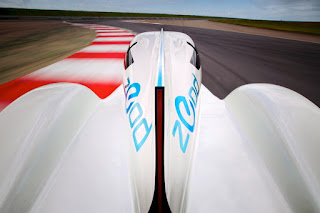 “We have many options to consider and test. The test program is part of a longer term goal of developing a system and a set of rules for this type of technology in partnership with the ACO that would be best suited to competing at the highest level of this sport.

“Nissan is a leader in electric vehicle technology for the road, now we want to take those lessons learnt and utilize that knowledge base in the development of the new race car.

“Our design team on the Nissan ZEOD RC program has concentrated heavily on packaging and aerodynamic efficiency that will not only provide extreme performance but high levels of energy efficiency – the goal for all global automakers.

“A large part of our work in the coming months is to discuss with the ACO future opportunities for the ‘electrification’ of the Le Mans rules in the future and work towards delivering appropriate technology. Garage 56 is a bold move by the ACO to showcase Innovation and allow testing of untried components and systems for future competition use. To this end they are the most forward thinking promoter in Motorsport today.” 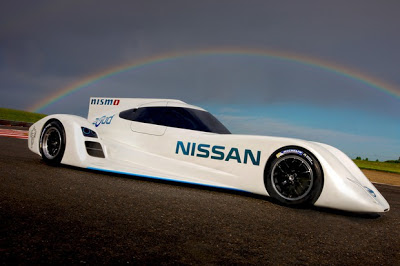