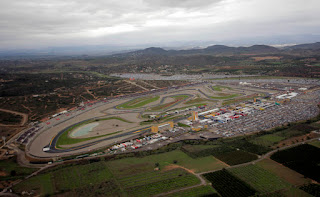 The eRoadRacing World Cup is finally getting underway with a season-opener race for European eRoadRacing, in Valencia Spain.  The launch of the European eRoadRacing 2013 season takes place as the main event at the Circuit de la Comunitat Valenciana Ricardo Tormo during its Green Prix weekend on Sunday 14 July.

Gonzalo Gobert, Circuit de Valencia General Manager, said: ‘Valencia is a race track built for the future and it’s a great honour to be able to host the FIM eRoadRacing series because it is breaking down barriers to create the next generation of motorsport. We look forward to becoming part of eRoadRacing’s history and we’re really proud to be part of the sport’s beginnings.’

“Green Prix”?  The press release has this to say:  “The Valencia Circuit will celebrate the Green Prix for the very first time in order to create a new within motorsport competitions that is related to sustainability, environmental care and reducing emissions.”

It’s unclear whether the Green Prix is a larger initiative, or just a name for an event happening that specific day.  I found this domain name, greenprix-valencia.com, that’s hosting an empty website.  It may be that the eRoadRacing organization hopes to use the Green Prix name for future events.  The name, Green Prix, has been used in other cases as well.

During the 2012 TTXGP event at Portland Raceway, an event called “EV Live” was held in combination with the TTXGP race.  That event featured a display of “green vehicles”.  These included some owned by individuals, including home-built conversions and some Nissan Leaf’s.  It being Portland Oregon, John Wayland was there with the White Zombie.  Also present were some electric vehicle startup companies based in either Oregon or California, including Arcimoto, Ryno Motors and Lit Motors.

The idea with EV Live was to make the TTXGP not just a motorcycle race, but a show for the public to see a broader range of electric vehicles.  From what the TTXGP team said in Portland, I know they like the idea of coupling the electric motorcycle race with this sort of event, and that they wanted to hold EV Live events in the future, and the Green Prix may be an outcome of that.

As for the series itself .. it’s been three months since the eRoadRacing series was announced

, with no news since following up on the season.  The eRoadRacing.com website is still empty, and instead all the news is being distributed from (ahem) the ttxgp.com website.  It’s made myself wonder what is going on, and a query to the team has gone without being answered.  However, announcing the Valencia event is a concrete step towards launching the racing series as a living breathing entity.

I can only imagine the difficulty they’re having getting the series up and running as a full racing promotion organization.  It would be easy for me to sit over here on my blog and shoot spitballs at them for not getting things like a website or fleshing out the calendar finished.  But I’ve talked with these people enough over the years to have a sense that setting up and running this sort of organization is much more difficult than you might expect from the outside.