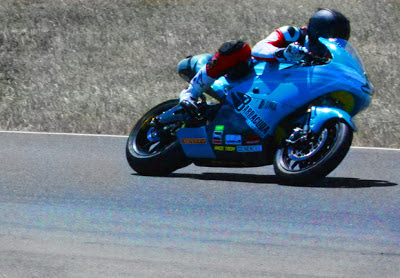 The Pikes Peak International Hill Climb is coming up, and Lightning Motorcycles is already on site, testing their race bike with rider Carlin Dunne, and setting history by turning in practice times that beat the gas bike racers.  Specifically, in the very first practice round for the 2013 Pikes Peak Hill Climb, Dunne posted the fastest times over all other competitors, not just electric, including the long dominant gas bike racers as well.

He was riding the Lightning Motorcycles electric race bike, earlier versions of which won many races and titles in the TTXGP, FIM e-Power, and land speed racing venues.   “This is the first time in history that an electric bike has beaten top gas bike competitors on the same level playing field,” said Richard Hatfield, CEO and Founder of Lightning Motorcycles.

Of course the important result is what occurs on race day, a bit over a week from now.  The result came during a practice round and it’s common for results to vary during practice rounds until the race event.  Still, this is a most interesting result and marks a threshold that electric motorcycles are beginning to cross – speed parity or exceeding the speed of the top gas bikes.

I don’t have time to track down the results to see what actually happened.  I want to know the actual results, I want to report the results here, but … sorry … – the Pikes Peak event is a time trial, meaning that Dunne will have made it to the top of Pikes Peak in less time than the gas bike racers.

The primary takeaway in understanding this information is that the Pikes Peak event draws top competitors from around the world.  When Hatfield says “this is the first time” we have to understand the context is “beaten top gas bike competitors.”  There are earlier instances where electric motorcycle racers have entered races against gas bike racers, in a sanctioned race, where the electric racers were racing for points and standing, and beat the gas bike racers.  However, all the instances I know of occurred in club racing.  The first of those is when Team Moto Electra (Brian Richardson team owner, Thad Wolff rider) raced in an AHRMA race and won

.  This year Brammo has raced in a couple AFM events in Northern California

, which I haven’t had time to report on, and I don’t know the results but I think they placed well or even won.

In other words, there are instances of electric bike racers wining against gas bike racers.  But because those were in club racing events it’s not the same as a win in the competitive field at Pikes Peak.

The result came during the “Tire Testing Weekend.”  This is a critical test for the teams, but practice time is limited because the event does take place on public roads which are closed for only short periods.