Formula E has signed a second team, China Racing, for the 2014 racing season.  The Chinese team is the second entry officially proposed to the FIA in the new global electric racing championship.  The announcement was made on Feb. 27 at the FIA headquarters in Paris.

The Chinese team will race in the 2014 Formula E Championship season.  They aim to become a “Constructor” in their own right, building their own Chinese-made electric race cars within 3 seasons. 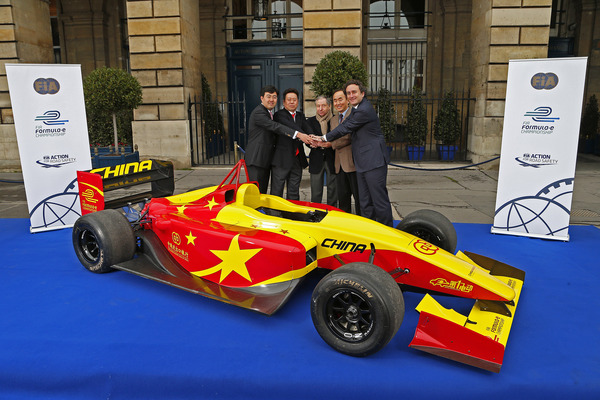 For the 2014 season the team intends to use the new Formula E customer car supplied by Formula E Holdings, which is currently being developed by Spark Racing Technology (SRT), McLaren and Dallara.  The first sketches of the SRT_01E was released

in addition to the China Racing announcement.  During 2013 the team will work with SRT and Formula E Holdings to test the customer car and promote the Championship globally across the 10 host cities planned for the first season.

In January, Drayson Racing was the first team proposed to the FIA

. In December, Rome was announced as a host city for the Formula E

.  In November, the partnership between SRT, McLaren and Dallara was announced

Mr. Yu Liu, Chairman of China Racing Formula E Team: “We are very excited that the FIA is launching an electric car racing series and we are proud to be one of the first Formula E teams. I believe Formula E is a perfect platform for China Racing and our key partners to get involved in the future of motor sport. Our presence in the Championship will encourage millions of Chinese fans to follow the series. We have full confidence in the FIA and FEH to promote Formula E. Our experience in racing event management will contribute to a successful Formula E city race in China showcasing electric formula cars with a futuristic sound and zero-emissions. We also believe this is a good platform for Chinese and global EV companies to do our part to help create a sustainable planet.”

Alejandro Agag, Chief Executive Officer of FEH: “We are delighted to present China Racing Formula E Team to the FIA as one of the 10 teams taking part in the Formula E Championship. China has enormous potential for the expansion of Electric Vehicles as a tool to fight pollution in cities. We think the FIA Formula E Championship can be a powerful tool to make electric cars popular with the Chinese public, particularly the younger generations. Having a Chinese team with us in the Championship will be key to succeeding in that challenge. We also expect Chinese drivers to join the competition, and we look forward to Chinese companies joining our effort to make cities more livable and healthy. The racing track record of China Racing, the first international Chinese racing team, speaks for itself and I am convinced they will be a fantastic addition to the competition. We are very happy to welcome today Chairman Liu and his team to the Formula E family.”