David Herron December 2, 2012 December 2, 2012Electric Cars, Formula E
The Formula E electric race car series is beginning to take shape for their first season, currently scheduled for 2014.  Yesterday the series announced an agreement that Rome will be the first European city to host a Formula E race.  In November the series announced a deal with McLaren and newly formed Spark Racing Technologies (SRT) to supply 42 electric race cars, ensuring that there will be enough cars to fill a racing grid. (see links below for both) 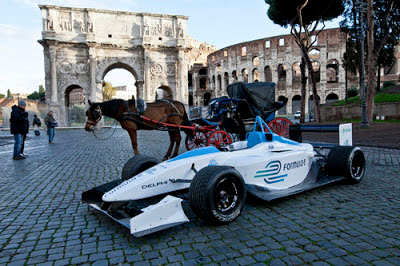 Formula E Holdings say that a large number of cities are interested in hosting the Formula E series races. The list of venues will soon be proposed to the FIA for the first season (2014) and there will be further announcements of other cities in the coming weeks. 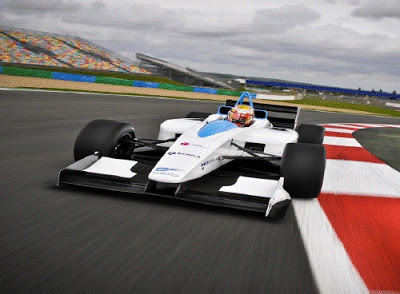 Formula E’s plans took a concrete step on Thursday with an order for 42 electric Formula cars to be built by McLaren and a newly formed company, Spark Racing Technology (SRT).
The Formula E is an FIA sanctioned Championship series featuring Formula cars powered on electricity.  Demonstrations of Formula E electric race cars are due in 2013, with the race series itself launching in 2014. The series is expected to have 10 teams, 20 drivers, with the races themselves staged in urban centers around the world.
The deal is for a collaboration between McLaren and SRT to build race cars for the series.  SRT is a new company and has Frédéric Vasseur as its CEO.  Vasseur had previously run Formulec, a company which built the first electric Formula car.  Vasseur later joined the Formula E organization when Formula E Holdings bought his company last August.  Now they are starting a new race car technology company, so I suppose this means they’re relaunching Formulec under a new name and tasked with providing cars and technology to Formula E.
Formula E is designated as an ‘open’ series, meaning that the teams are free to build their own vehicles.
Why, then, is Formula E getting into the business of building electric cars and providing them to the teams?  I’m sure that it’s a simple matter of ensuring a full race grid.  It would be embarrassing and unattractive-to-fans if the 2014 season featured only two teams, because it was so expensive to build suitable race cars and launch a full team of engineers, drivers and support crew.
The series plans to have four cars per team, with two drivers per team.  I’ve been told that this is because during a race they plan to have each car do a set number of laps, followed by the teams’ second car making a few more laps, and so on, until all four cars have run.  I don’t know the precise race format (will ask Formula E for more information) but the point here is the expense this will entail for each team.
For each team to have four electric Formula cars – well, you’re talking about millions of dollars of funding per team.  Just to get started.  How many teams will be able to afford this?

For Formula E to provide cars to teams should reduce the barrier-to-entry for teams to sign up and participate. At the same time, by being an ‘open’ series the door is open to a team to develop their own race cars. For example, when Toyota Motorsports set a lap record at the Nürburgring (or Nürburg Ring) in August 2011

, with the EV P001, they claimed to have proved the TMG electric drive train was “ideal to power any future single-make electric motorsport series.” This is a broad hint that TMG intends to participate in a future electric race car series, and/or to supply parts to teams who wish to do so.

Having attended quite a few TTXGP races I’ve seen up-close the effect of an ‘open’ series.  A risk exists of extreme power mismatches between the teams, resulting in fast and slow cars racing each other.  That degrades the enjoyment of the race, and is a bit dangerous to the racers.  Especially when the speed difference is 60 miles/hr, and the slow vehicles look like they’re standing still when passed by a faster bike.  Formula E is planning to release technical rules soon, and perhaps the rules will specify power levels and battery pack sizes to ensure the cars in their series are evenly matched.

Jean Todt, FIA President, said: “It gives me great pleasure to be in Rome for this exciting announcement that the eternal city has expressed its firm interest to host a race in the Formula E 2014 championship calendar. The contrast between this innovative motorsport series and the rich ancient history of Rome is one I am sure the public and the media will be intrigued and enriched by.”

Alejandro Agag, CEO of Formula E Holdings said: “We are honored to have Rome on board as the first European city to host Formula E, since Italy is renowned for its motorsports passion, expertise and technical innovation. Clean urban mobility and sustainability are a priority for our Championship, and Formula E wants to become a showcase for these advances through an entertaining and all-inclusive spectacle. We are thankful to the Rome City Mayor and authorities for their enthusiastic welcome and support.”