), the championship race had only four teams from the TTXGP Europe series participating.  No teams from North America or Australia attended, doubtlessly because of the five-day notice the teams received.

The TTXGP organization is unlikely to comment publicly on why this race had a small starting grid that wasn’t representative of the world-wide racing action under the TTXGP banner the last two years.  But we know some effects that contributed to the situation. 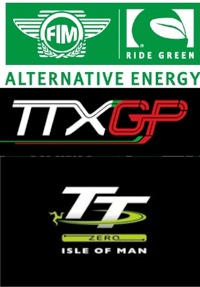 A major story of the season was the attempt for TTXGP and FIM’s e-Power to hold joint racing events.  In 2011 there were to be three such joint events, in Laguna Seca in July, at Le Mans in September, and a “to be announced” location and time for the final race.  As time ticked on throughout the season, the “to be announced” location and time for the joint championship was never announced.  Presumably the TTXGP organization, needing to hold their championship race, gave up on the joint race at some point and had to set up their own race while running short on time to select a location and date and made the best they could out of a worsening situation.

We heard rumblings all season long that behind-the-scenes the two series weren’t exactly cooperating.  In September this surfaced when a series of complaints were posted by Harry Malin (a.k.a. Brammofan and a.k.a. emotorules) shortly after FIM posted video from the Laguna Seca race.  That race was supposed to be a joint partnership between equals, but the video made zero mention of the TTXGP participation.   Many such as Mallin took this as a slap in the face of the TTXGP (see Not just disappointed. I’m angry

Theoretically this sort of the political wrangle shouldn’t be anything more a rumble in the background.  It’s unfortunate that this years TTXGP world championship appears to have been affected as a result.

The TTXGP is attempting to do big things – to establish a huge change in motorsports.  Motorsports doesn’t always willingly change, and this change from gasoline-driven to electrically-driven racing is far more drastic than for example the change from two-stroke to four-stroke motorcycles.  The existing motorsports paradigm is certainly going to act to preserve the gasoline homeostasis.  It’s always the job of the old order to preserve itself in the face of upstarts.  Making big changes is rarely easy.  The TTXGP, as the leader in this change, is perhaps the target because they are challenging the status-quo.

We know that lithium battery technology triggered a tipping point that unleashed a wave of changing transportation norms because of ever-more-competetant electric vehicles.  As battery and electric drive train advancements are made electric vehicle capabilities will inexorably improve.  The time is coming, in a few years, where electric cars and motorcycles will perform at levels matching the top-of-the-line cars and motorcycles.  This is inevitable and one might think the old guard clinging to their gasoline are fighting a losing cause.