)  For the second year running, Meunch Racing is the TTXGP world champions, with Zongshen in second place. 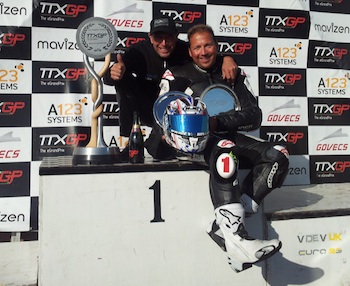 The twitter reports (see below) indicate it was a clear and sunny day, a rarity for Wales.  The results and TTXGP’s race report is replicated below.

MotoCzysz sizzles in TTXGP Finale, while Brammo wins the championship

Brammo, Mission, and Zero go head-head at REFUEL in preview of TTXGP next month

Re-introducing the TTXGP for the 2011 electric motorcycle racing season

12 rounds, 3 continents, 1 champion. A rewarding end to a very challenging 2011. The TTXGP World Championship 2011 concluded in Anglesey on Oct 15/16 and proved to be a thrilling exhibition of technology and talent.

The Spectators were treated to an exciting first practise of the day, a mixed and open grid of petrol bikes of all shapes and sizes alongside the futuristic electric TTXGP machines.  Whilst the electrics were permitted to start the practise by the ACU,  it was from the back of the grid, but to the amazement of spectators; the Münch Machine piloted by Matthias Himmelmann gave chase the best out there whilst the light nimble bike of Ho Chi Fung from China’s Zongshen was certainly mid field of the 400cc bikes out on the track this weekend.

The paddock was charged with talk of the Electric Bikes with crowds coming through the TTXGP paddock area.  It was a fantastic reception for the teams by the local fans and that coupled with the fact that Anglesey strives toward sustainability and energy efficiency in motor sport making it the perfect partner for TTXGP.  The Circuit uses wind to provide energy to the paddock….

Sadly the day did not start well for all with Team Zongshen losing one of its two bikes due to a cell failure that could not be recovered.  However Ho Chi Fung did the team proud flying round the track on a fault free morning practice as well throughtout the race.  It was the best and most confident we have seen this rider all season.  The technical track suited the bike well and the fans were certainly impressed.  With an average race speed of 71.113 he was only 3 seconds slower on his brushed DC powered bike on average than the AC engine of the Muench TTE.  Ho Chi Fung commented “Im very happy. I worked hard with the engineers and mechanics from the start of the season. We gained confidence and gradually increased the speed of the bike…To be 2nd in the Euro championship was unexpected, and lucky (in out 1st year). Some of the other teams had problems . We have gained good experience this year, and will take that knowledge forward to next year and the future.”

No. 48 Matthias Himmelman for Muench Racing was by far the star of the show; over 4 seconds faster on every lap than his closest rival Himmelman looked strong from start to finish. Himmelmann was leading by a very impressive 21.4 seconds, into 7th lap and looked untouchable.  His fastest lap time of 1:39:311 was comparable to the 600cc bikes on the track that weekend and demonstrated a significant improvement year on year.  By the 9th and final lap he was simply flying, finishing 40.162 second ahead of his nearest rival, Ho Chi Fung of Zongshen.  The win represents the second consecutive year at the top of the pile of world electric race teams.

This was an amazing turnaround for the team after a major technical failure in the opening round of the Euro Championship. Racer Matthias Himmelman said “I worked hard over the winter riding bicycles and weight training, to get fitter for this seasonand it has paid off, I will continue to do this for the future. My favorite race of the season was SPA francorchamps, it is an amazing circuit. All the development that we do with these race bikes goes into our plan to make production bikes.’

The teams cheif engineer Thomas Schuright added “We had a hard start to our season losing the first bike, and also after Laguna Seca we made some modifications to our motor which made us a lot faster …We plan in the future to not only ride our electric powered race bikes, but to charge them at the track through renewable energy such as solar panels”

The bike has been getting better and better with every race and the team have some exciting plans for the future… with more than just hints of a production racer for sale or hire soon they are certainly one to follow very closely in the coming months.

Credit all photos by Neil Lambert