Electrics on track for outright Pikes Peak wins, following excellent results at 2014 Pikes Peak for both cars and bikes

In last weekend’s Pikes Peak Hill Climb race, electric car drivers took 3 of the top 4 results in the overall ranking, and both electric car and electric motorcycle racers claimed hugely positive results.  While this isn’t as stunning as Lightning Motorcycle’s overall win last year with a 20 second margin over all motorcycle racers, that Mitsubishi’s drivers came within 3 seconds of an overall win is astounding.  Jeff Clark set the record for production electric motorcycles on a 2013 Zero, Jeremiah Johnson gave an excellent first outing for the Brutus Motorcycles V2 Rocket, and more.

Comparing results across classes, the electric vehicles gave great results holding out the promise for outright wins within a couple years.  The Mitsubishi team almost took the outright win this year, coming up less than 3 seconds short.  But in the electric motorcycle camp, while at first read you see Jeff Clark taking 72nd overall and be disappointed, he beat everyone in the 250cc class and would have finished middle of the pack in the Lightweight class.  Similarly Jeremiah Johnson would have finished in the middle of the Middleweight class. 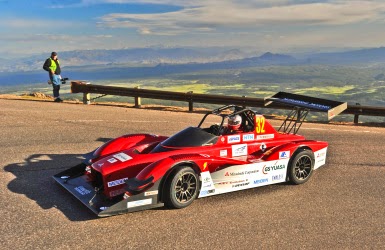 To compare this with the rest of the field – the overall winner this year was Romain Dumas, in the Unlimited class, with a 9:05.801 lap time.

That puts about 2.4 seconds between the overall winner and the Mitsubishi entry.    Oh.. My.. God..  Could we be seeing an electric team as the outright winner in the 2015 Pikes Peak race?

Here’s a video during qualification – the siren is not a police car chasing him, but a noise maker required to be carried by all the electric vehicles.


Upon taking 2nd and 3rd in the overall results, Mitsubishi claims “the stage has been set for highly energy-efficient and sustainable electric-powered vehicles like the Mitsubishi MiEV Evolution III to soon become the dominant force in this challenging one-of-a-kind motorsport competition.” 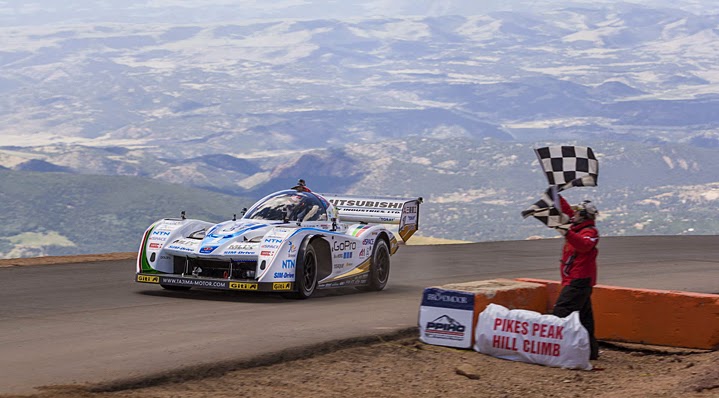 Monster Tajima’s team put out a press release explaining that warm weather, and heat within the vehicle, caused their result to be less than expected. This is a very Japanese thing to say, isn’t it? “The team regrets that their improvements on the machine could not be well versed in terms of time.”

And this: “This year I am both disappointed and pleased at the same time. Yes of course, I am disappointed that I did not win. However I am greatly pleased that our work in promoting electric vehicles have raised so much awareness that even a major motor company such as Mitsubishi Motor is inspired to win the race at full force. Now Tesla, Toyota, and Honda are also participating in the electric car division. I am hoping that this movement would catch more speed where the Pikes Peak International Hill Climb race would be known as the forefront of tackling the environmental problems we face today. I give kudos to the Mitsubishi Motor Team that have won this merciless race. Congratulations! Finally, I would like to thank all our sponsors and supporters from the deep bottom of my heart and appreciate all the cheers from all.”

There were two production electric cars entered – a Honda Fit EV, and a Gen2 Toyota RAV4 EV.  The Toyota appears not to have finished, but the Honda Fit EV turned in a respectable 12:55.591 lap time, and took 95th place overall.  That beat the modified Tesla Roadster, which sure is an interesting result. 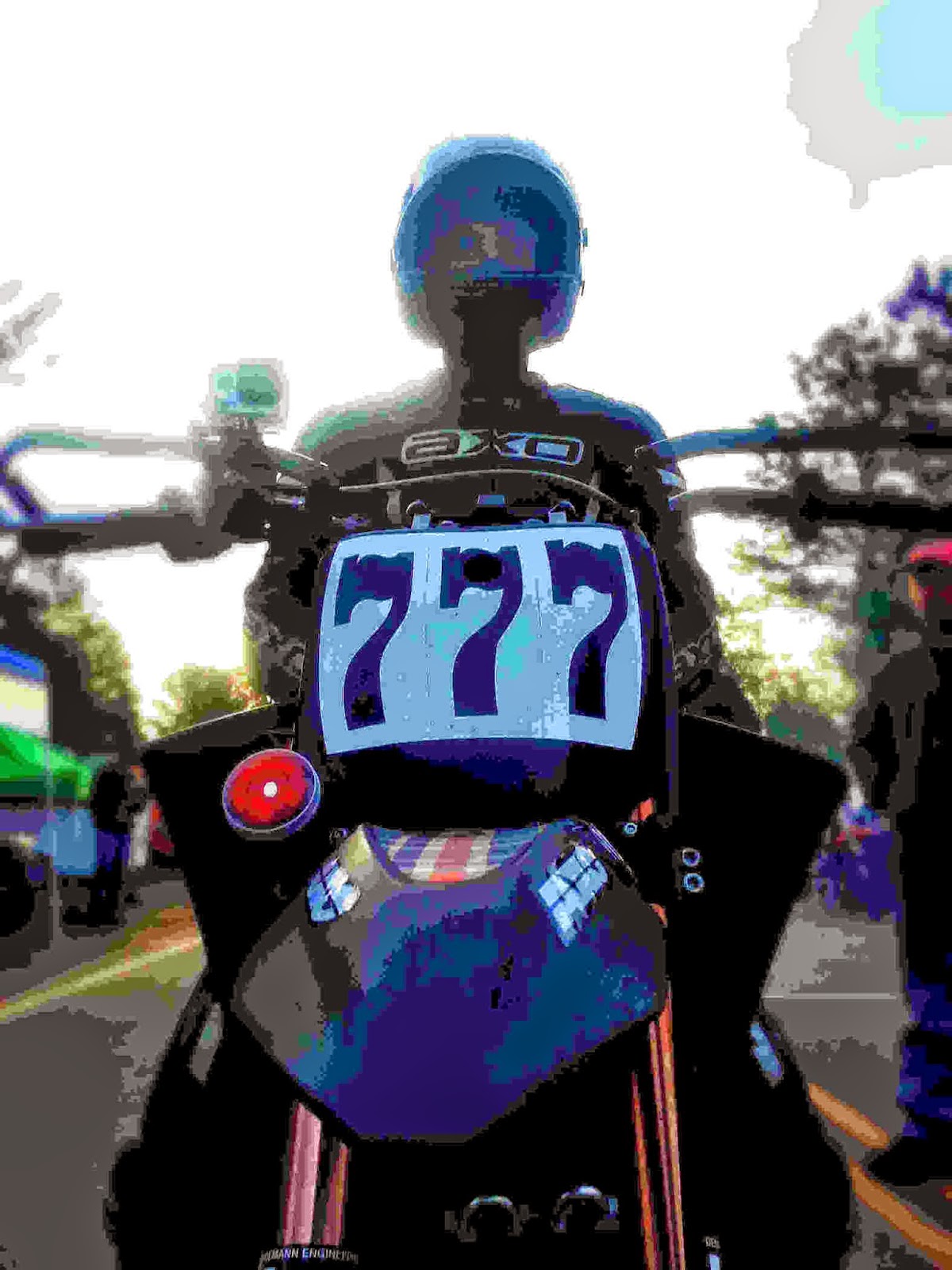 Now let’s get to the Motorcycles.  First up is the production electric motorcycle class, with Jeff Clark (supported by Hollywood Electrics) taking 1st place.  He scored an 11:59.814 lap time, taking 72nd place overall.
This is the first sub-12 second time for an electric motorcycle.
The interesting thing about this is Jeff’s bike is not a Zero S or Zero DS, but a 2013 Zero FX.  That bike is the “street fighter” in Zero’s lineup, and is noted for its light weight.

“We’ve shown that it won’t be long before the top riders in all classes at Pikes Peak will be on electric,” said Harlan Flagg, Founder of Hollywood Electrics. “There is no faster bike off-the-line than an electric motorcycle. We’re really excited to prove our tuning abilities on Zero Motorcycles up the mountain, besting all the prototype bikes and the talented engineers behind those.”

“Congratulations to Jeff Clark and Hollywood Electrics on a monumental victory. To break the 12-minute mark on such a challenging course is truly remarkable,” said Richard Walker, CEO of Zero Motorcycles. “It shows what electric motorcycle technology and entrepreneurial spirit can accomplish, and we are proud to be with them at the forefront.”

Asked about how the race went, Jeff Clark said, “I had a couple of close calls, but at the end of the day bested my time from last year. So proud to be the fastest electric bike up America’s Mountain. Thanks to my crew and my sponsors, without whom I couldn’t have done it.”

Last but certainly not least is the Electric Modified class, won by Jeremiah Johnson.

Johnson was riding the Brutus Motorcycles V2 Rocket. The bike had only been “finished” the week before, and Johnson explained the suspension hadn’t been tuned or any other bike “setup” work that would have helped him get a better time. As it is he won his division, taking 83rd overall, with a 12:20.448 lap time.

Here is his video from the race.


Again, the noise maker is due to PPIHC regulations, it’s not a police car chasing him up the mountain.

There’s a close call partway up the mountain when someone on a motorcycle kinda rolled out onto the road.  Good save, Jay. 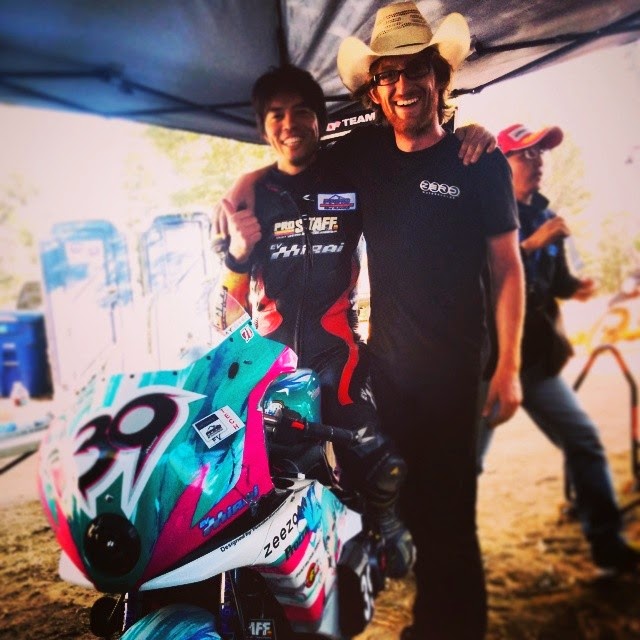 Yoshihiro Kishimoto was riding a bike that I gather was originally built for the Isle of Man TT ZERO, but this year they chose to enter the PPIHC.  He came in 103rd overall with a 13:36.654 lap time.

According to Brandon Nozaki Miller (shown in this picture) the bike got a couple battle scars when “Kishimoto San had a disagreement with the pavement in the second half of the race”.  We imagine that means he took a spill but was able to get back on the bike and finish.

Speaking of Brandon, we want to make a special shout out to him and his participation in the 2014 PPIHC. 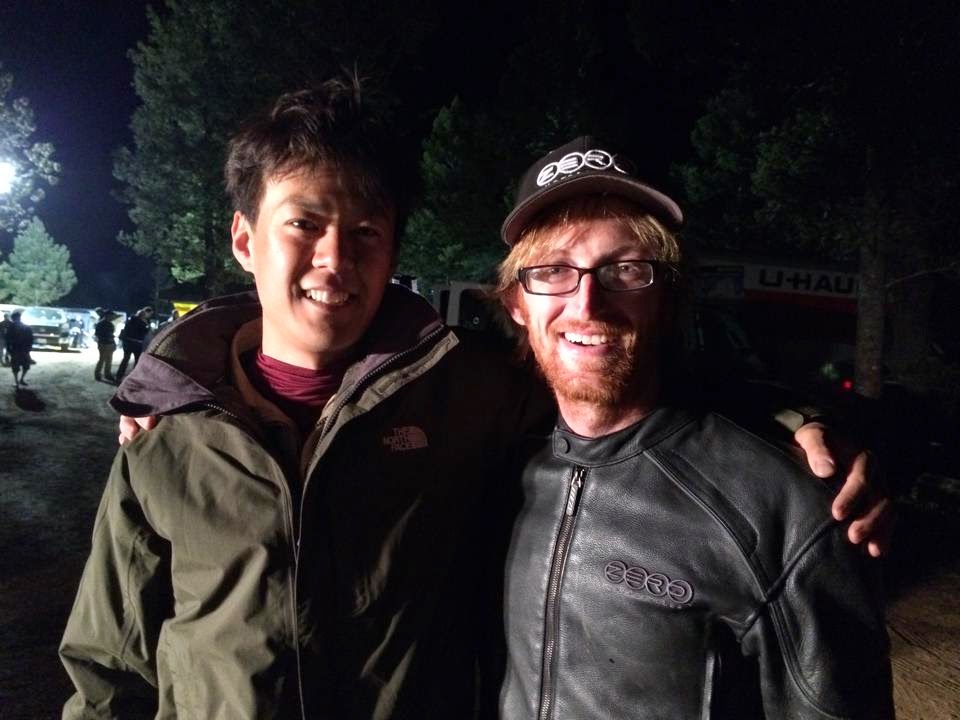 Even though he wasn’t registered to race this year, as he was last year, he did take a week of work to travel to the event as part of the Hollywood Electrics support crew.  Judging by his Facebook postings during the week, Brandon was helping all the electric motorcycle teams with his technical skills as well as taking pictures.

He put together a “Story” over on Google+ about the week

that’s well worth clicking on.

The electric motorcycle racing teams have always had a special camaderie – in most cases – between the teams.  Here’s an example, with all of them together grinning for the camera looking pleased with their accomplishment of moving the needle forward a couple more notches.

While most of them took results pretty far down the overall ranking, the results of this group show considerable improvement.  That is, improvement for the production electric motorcycles.

One wonders how Jeff Clark would have fared against a 2014 Zero SR (Brandon!!) or against a 2014 Empulse TTX, but he improved his time over last year.  Further, while the Brutus V2 Rocket is a prototype bike, it’s nearly ready for production (apparently) and Brutus does have it listed on their site with a $26,000 price tag.

In other words, a few years ago the story for electric motorcycle racing was far out prototype bikes by Brammo/Lightning/MotoCzysz/Muench and others.  The production bikes of that era weren’t capable of finishing something like Pikes Peak until the 2012 Zero model line, and now both Brammo and Zero are hitting their stride with excellent production electric motorcycles.

Now it’s possible for a rider to just buy a Zero or Brammo bike, do some tweaking, and get performance similar to or better than 250cc gas bikes.  Jeff Clark’s 11:59.814 lap time beat the pants off the Pikes Peak 250cc class whose fastest rider was Matt Meinart with a 12:09.513 lap time.  He would have finished in the middle of the Pikes Peak Lightweight class, had he been entered in that class.  Jeremiah Johnson would have finished in the middle of Pikes Peak Middleweight class, had he been in that class.

Within a couple years the Production Electric Motorcycle class could be a significant force at Pikes Peak.  They’re already giving results in the middle of their respective gasser classes.  Given the rapid progress being made, it’s a certainty that more electric motorcycle racers will do as Lightning did last year, and win outright.  It’s just a matter of “when” not “if”.

It’s within the realm of likelihood, now, that the outright winner could be electric next year, or the year after.

Won’t that catch the attention of lots of gear-heads?