For the 2010, 2011, 2012 and 2013 racing seasons the Laguna Seca Raceway has hosted one of the most important historical sequence of racing events.  I’m talking about the FIM e-Power, TTXGP and now eRoadRacing electric motorcycle races.  Historical?  The whole project of establishing electric motorcycle racing as a recognized sport – that is history in the making.  Unfortunately the Laguna Seca chapter of the saga appears to be over, because the other race occurring that weekend (MotoGP) is pulling out of Laguna Seca.

The MotoGP crowd doesn’t understand something … their days are numbered.  They are dinosaurs that are about to be destroyed by a new breed of electrified racing.  But let’s not get too distracted and focus on the news right now.

The Monterey County Weekly is reporting

that the MotoGP event will not be returning to Laguna Seca starting in the 2014 season.  The stated reason is rising fees are making it uneconomical for the Laguna Seca Raceway to host the MotoGP weekend despite their standing agreement that lasts beyond 2014 to do so.  Dorna, the promoters of the MotoGP, have apparently increased the fees by quite a bit.

Laguna Seca Raceway is a non-profit organization that also serves as a county park.  The races hosted at the track bring in money to the local economy both from the event itself, and the spillover $$’s that fans spend while at the track.  Obviously fans could easily include a trip to Monterey (the city) to see Cannery Row or the Aquarium along with their MotoGP trip.  And I know from having tried to book hotel rooms during the MotoGP weekend that room prices get jacked up through the roof that weekend.

But .. the important thing for us on Electric Race News is what will be the effect on our favorite race event?  The Laguna Seca round of electric motorcycle racing?  It clearly won’t happen during the MotoGP weekend because MotoGP won’t be there. 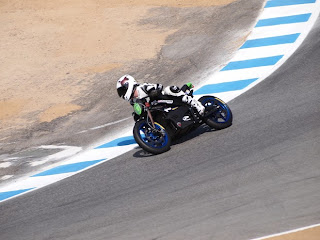 What Azhar Hussain explained to me last Winter is that eRoadRacing, as an FIM series, has to run at FIM homologated race tracks.  In the US that means Indianapolis, Austin and Laguna Seca.  Apparently Miller Motorsports Park lost their homologation status.

The same article does say that World Superbike (another FIM series) will be returning to Laguna Seca during 2014.  Hence, eRoadRacing could conceivably piggy-back on that event next year.  There was even a chance they’d do so in 2013 to give three North America events this year.

The general problem here seems to be declining audiences for motorcycle racing overall.  Almost a year ago we covered similar news, that the AMA Superbike weekend at Sonoma Raceway (formerly Infineon Raceway) was being canceled

In both cases the cancellation of a big name gas bike race is forcing problems on our favorite fledgeling electric motorcycle racing series.  It doesn’t matter that the gas bike racing is a dinosaur, at this stage they’re still in charge and the electric series has to go where the gassers go.

The effect on us is that we’ve lost another benchmark race.  I’ve been using results from both the Sonoma and Laguna Seca races to gauge progress from year to year.  Each year has shown significant improvements in electric superbike racing results.  But it’ll now be harder to directly compare year-year improvements, unless eRoadRacing does hook up with World Superbike.