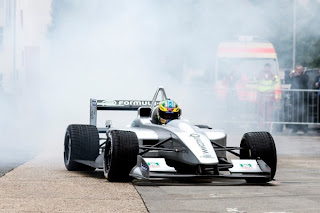 Drayson Racing was the first team to join the Formula E. While they will race with the SRT_01E cars during the first Formula E season, they intend to become Manufacturers during the second season. Coincidentally, or not, “The wireless charging system will be made available to the race cars from season two.” 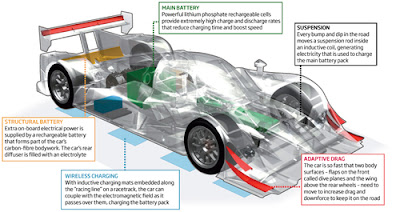 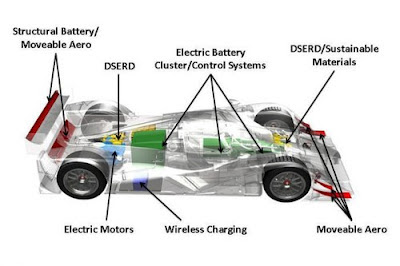 The Qualcomm Halo WEVC technology uses “resonant magnetic induction” to transfer energy between a sending pad, and a receiving pad in a car.  This is one of the wireless charging systems being developed for potential use in electric vehicles.  The Halo team hopes to have pads installed in roads so that cars charge wirelessly while driving.  Drayson Racing hopes that a race car could be charged wirelessly in race conditions without having to make pit stops.

That last point is of course one which is exacerbated by Formula E’s rules.  Namely, the cars being built for the 2014-15 season have a 20-25 minute racing time, and they want the races to last for an hour.  To work around that problem, Formula E organizers have decided each team will have two cars and swap cars halfway through the race.  But they come up a little bit short, 40-50 minutes of racing time with two cars in a race that’s supposed to last for 60 minutes.  Apparently the plan is to run the first car for the last 10ish minutes.

But, if the fullness of the Qualcomm Halo vision were working …. but … I have my doubts whether a race car, at race speeds, would pick up much energy while flying over the top of a wireless energy pad.

I rather think they’d have had a better time of it by swapping battery packs during pit stops – because that’s directly analogous to a gas powered racer refueling the tank.

Qualcomm Halo Technology to Help Reduce Environmental Impact in Automotive Racing
BERLIN, GERMANY (9th September, 2013) – Qualcomm Incorporated (NASDAQ: QCOM) today announced a multiyear agreement with Formula E Holdings (FEH) to become an Official Founding Technology Partner of the FIA Formula E Championship, the new international championship featuring racing cars powered exclusively by electric energy. The agreement will allow Qualcomm and FEH to showcase mobile and Electronic Vehicle technologies globally through an exhilarating sport and demonstrate how current and future generations all over the world, can benefit from wireless, sustainable technology on and off the track.
As a leader in the mobile space, Qualcomm will advise FEH in their quest to incorporate new and more sustainable technologies into the racing series. As a start, Qualcomm Halo™ Wireless Electric Vehicle Charging (WEVC) technology will be adapted to be fitted into the 2014/2015 FIA Formula E Championship safety cars so they can be wirelessly charged. The wireless charging system will be made available to the race cars from season two.
Qualcomm Halo WEVC technology uses resonant magnetic induction to transfer energy between a ground-based pad and a charging pad on the electric vehicle.  Drivers simply park over the base pad and charging commences automatically.  As part of its advisory role, Qualcomm will evaluate the connectivity and mobile technology of each of the ten venue cities around the world, providing solutions to help enhance the spectator experience around the circuit such as live streaming to fans, video gaming and social media.
“Our collaboration with the FIA Formula E Championship is not just a great opportunity to showcase Qualcomm technologies such as our Halo WEVC system, but to evaluate and improve wireless connectivity and EV technology across the globe, especially in the host cities,” said Paul Jacobs, Chairman and Chief Executive Officer of Qualcomm. “We hope this arrangement will leverage mobile technology to enhance the fan experience and impact the global movement towards more sustainable living.”
“The FIA Formula E Championship is going to become a showcase for electric vehicle technology,” said Alejandro Agag, CEO of Championship Promoters Formula E Holdings. “As the global leader in mobile technology, Qualcomm’s involvement will not only help us develop new advances in EV technology but also to provide our fans and the world’s EV community with the best race viewing experience possible. New technologies in connectivity, wireless and mobile, fit perfectly with a Championship open to new technology, not only for the cars but for everything around the venue.”
For more information visit www.fiaformulae.com