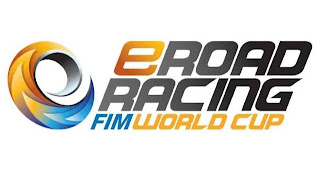 The eRoadRacing guys are racing in Indianapolis for what may be the final race of the 2013 North America season, and I’m not there, missing a North America TTXGP/e-Power/eRoadRacing for the first time.  Whether there’s something wrong with this picture remains to be seen, but in the meantime I’m combing through stuff I can find to deliver some news.  The top level items are that the roster is much like it was at Laguna Seca – Brammo and Zero bikes, and no sign of Lightning or others.  That leaves the Brammo top bikes uncontested in the series.  There is a new team, a college team named Electric Vehicle Team or E.V.T. organization of Southern Polytechnic State University, who apparently built a bike just before the race, showed up, had some problem that blew something, and won’t be able to race.  While that’s sure to be disappointing it’s quite an accomplishment just to show up, so don’t feel too bad, and make sure to come again when you can.

Shane Turpin has pole position, and Eric Bostrom is lining up at the #2 spot.  But this is what we expect from the roster, right?  Kenyon Kluge is filling out the front row.

In these results realize that the lap length is 4.216 kilometers, or 2.61 miles, versus 3.61 kilometers or 2.23 miles at Laguna Seca.  It makes it trickier to compare lap speeds between tracks.

In any case the qualifying/practice round 1 showed a fairly well packed field among the bikes other than the Brammo Empulse RR’s.  There was as previously two races, the Empulse RR’s and everyone else, of course.  The RR’s look evenly matched with Shane Turpin doing a bit better than Eric Bostrom.  The other similar thing to Laguna Seca is that Kenyon Kluge and Ted Rich are outperforming Shelina Moreda. 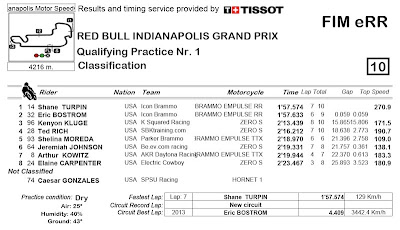 Another thing to note is that Brandon Nozaki Miller is not riding the Electric Cowboy bike.  Instead Elaine Carpenter is.  She is the wife of Ted Rich and together they run SBKTraining.com.  I haven’t checked with Brandon to see what’s up with him.

The race report from that round

quoted people just getting used to the track and deciding on gear ratios.

From looking at the detailed results it appears Ceasar Gonzales did make it out for at least one lap.  Going by the pictures in the album linked below, he crashed out and while the team tried to fix the bike they couldn’t

The results from qualifying/practice 2 showed across the board improvement, and Elaine Carpenter moving up the ranks. 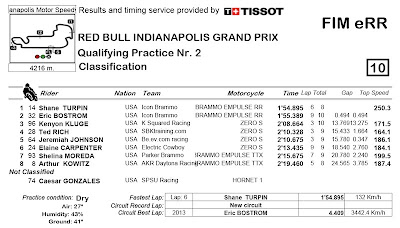 The only one who dropped in the ranking is Shelina Moreda.  She did find a couple seconds to shave off the time.  We remember that at Laguna Seca it seemed that during qualifying she may have been “taking it easy” and planning to race hard when it actually counted, but of course we weren’t able to verify that assumption because of the crash in the first lap.

In the Friday writeup Jeremiah Johnson said that the Zero’s had all been geared differently to see which gear ratio would work best at Indy.  He said his bike had been geared the slowest, and that for todays practice round it would be geared faster.  That’s what we see here.

SHANE TURPIN: “It was amazing. I’ve never been to the Brickyard. The track is crazy, nothing like anything I’ve ever been on. Being on the electric bike here for the first time was unbelievable, and I’m so happy to have been a part of this whole new revolution. Everything really is the same as a regular motorcycle. The only thing different is I’m not shifting the bike. It’s quiet, but I’m making motorcycle noises in my helmet because the noise is gone. We raced at Laguna Seca, and I broke the track record for electric bikes. This system is just taking off, getting better and better.”