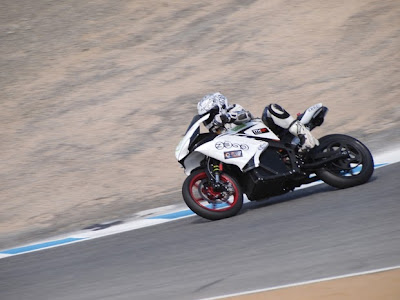 Zero Motorcycles put out a press release today saying they, well, Kenyon Kluge, had not only taken 2nd place in the eRoadRacing World Cup race just held at Laguna Seca

, but that they won the eSuperStock Production Award at the race.  I must have missed that award being given out.  It wasn’t part of the official award ceremony, and I don’t recall it being discussed by the eRoadRacing organizers.

The eSuperStock concept was developed during the 2012 season when Zero Motorcycles ran a fleet of 4 Zero S’s in every North America TTXGP race.  The definition at that time was “production” electric motorcycles with sales over 25 units.

While I agree that “production electric motorcycles” should have a sales volume requirement of 25 bikes or so at a minimum, I think this definition of eSuperStock is flawed.  If you’re going to define a racing class it should be based on performance, not sales volume.

In any case the press release also mentions how Kenyon Kluge recorded the fastest laptimes ever for a production electric motorcycle – 1:48.706 – and that makes me want to go back in history to 2010 when it was such a miracle that we were having electric motorcycle racing at all.  That was just 3 years ago, but my how far have we come.

The top bikes that year were Lightning Motorcycles and MotoCzysz.  MotoCzysz had just returned from winning the TT ZERO on the Isle of Man, and the FIM e-Power series held the first electric motorcycle race at Laguna Seca in late July 2010.  They invited teams in from both Europe and North America, and it was probably the largest grid for electric motorcycles in the four times we’ve raced the Laguna Seca MotoGP weekend.

The leading bike during the race was made by Lightning, with Michael Barnes riding.  This was their first race bike, the one with the unobtanium EV1 motor, and unobtanium A123 battery pack.  He led strongly throughout the race until the last 100 yards or so of the last lap when his bike slowed down, and Czysz was able to zoom in front to take the victory

As exciting as that race was – it gives us an interesting contrast to the times recorded during the 2013 eRoadRacing race during the Laguna Seca MotoGP.

That’s three years, and look at the improvements.

In 2013 the speeds of the manufactured Zero S, widely regarded to be a 250cc/350cc equivalent, were almost as fast as the best bikes in 2010.  Well, almost as fast in lap time, but faster in terms of the total time to complete the race.  Oh.. wait.. that’s because Kluge only completed 8 laps because he got lapped, while Bostrom completed 9 laps significantly faster than Kluge completed 8 laps.

SANTA CRUZ, Calif., (July 23, 2013) – Zero Motorcycles, the global leader in the electric motorcycle industry, had another record breaking day of racing this past Sunday, July 21, 2013, at the 2013 FIM eRoadRacing World Cup at Laguna Seca MotoGP. Following very impressive performances at last month’s Pikes Peak International Hill Climb, Zero Motorcycles continues to showcase the high performance results possible with their 2013 production-based line up. With four motorcycles qualifying to compete at this year’s event, Zero took both second and third places on the podium. Kenyon Kluge, Director of Electrical Engineering for Zero Motorcycles, won not only the eSuperStock Production Award, but also took second overall amongst all electric motorcycles competing and recorded the fastest times ever for a production-based Zero Motorcycle (1:48:706).
“This weekend was incredible and the Zero team really put an incredible bike under me to get the job done. My qualifying time was nearly 12 seconds faster than our best time from 2012 and our factory improvements to the 2013 model line really helped to make up the difference,” said Kenyon Kluge, Director of Electrical Engineering for Zero Motorcycles. “All of the riders on Zeros this weekend showed how impressive our production-based bikes are and big congratulations go out to everyone at Zero, the individual racers and most importantly of all, the support crews.”
Finishing third overall behind Kluge was Jeremiah Johnson, sponsored by BE-EV.com, who also scored his impressive race result on a production-based Zero Motorcycle. In addition to Kluge’s and Johnson’s podium results, both Brandon Miller, well-known as the “Electric Cowboy,” and Ted Rich, sponsored by SBKtraining.com, also competed on minimally customized 2013 Zero S ZF11.4 models. All Zero Motorcycles entered in the event used 2013 production-based technology with racing modifications applied.
“This is simply amazing,” said Scot Harden, Vice President of Global Marketing for Zero Motorcycles. “We’re still riding the high from our historic showing at Pikes Peak and now we’ve done it again. Kenyon and the entire Zero team should be very proud of the results they achieved. This only confirms how much of the success we are currently enjoying, both on and off the track, is due to the passion and commitment of our engineering and manufacturing teams who supported the Laguna Seca MotoGP. Congratulations to everyone involved.”
The eRoadRacing World Cup is a successor series to both the TTXGP and e-Power electric motorcycle series. It replaces both series, and is sanctioned by the FIM. Held at Mazda Raceway Laguna Seca, the racetrack is 2.238 miles in length with a 180 feet elevation change. It has eleven turns, including the famous “Corkscrew.” Zero’s recent successes at both the 2013 FIM eRoadRacing World Cup at Laguna Seca MotoGP and Pikes Peak International Hill Climb further validate the impressive performances specifications available from the 2013 Zero Motorcycles model line-up. With 68 ft.-lbs. of torque, 54 hp, top speeds of 95 mph and up to 137 miles on a single charge, the Zero S is available to consumers through Zero’s North American dealer network and global distributors. For more information on Zero Motorcycles visit www.zeromotorcycles.com.

About Zero Motorcycles
Zero Motorcycles is committed to transforming the motorcycling experience by bringing to market highly innovative electric motorcycles that offer exceptional value and performance. Zero is powered by innovation, driven by passion, guided by integrity and measured by results. Through extensive research, insight and experience, Zero combines the art and science of motorcycle development to create and manufacture products that excite consumers and inspire brand loyalty. Zero is determined to be the preeminent global electric motorcycle company.