After yesterday’s eRoadRacing qualifying at Laguna Seca, todays race looked to be a shoe-in for Brammo to win 1st and 2nd, a three way contest for 3rd, and so on, just like it was in qualifying.  Today was one of those race days where the results leave you scratching your head, saying “the results are the results.”  In 1st place we had Eric Bostrom, in 2nd place we had Kenyon Kluge (who’d qualified at 3rd place), and in 3rd place we had Jeremiah Johnson (who’d qualified in 6th place) … AND, only 4 bikes out of the 8 starting made it to the finish line.

That last point was very important for one Shane Turpin, who completed 8 laps just like all the others (he’d lapped the field) but who failed to finish the race.  On the results sheet he scored a DNF, thanks to the battery pack running out of juice on his last lap.  Turpin had led for most of the race, was hitting 140+ miles/hr speeds on the front straight, and even broke Mission Motors’ lap record during a race by hitting 1:32.581.  During the 2011 e-Power/TTXGP, Steve Rapp (Mission Motors) had a 1:33.194 best lap time during the race.  Rapp’s faster lap time, 1:31.376, occurred during qualifying and that record still stands.

Basically, Turpin was tearing up the track running much faster than team-mate Eric Bostrom.  Team Manager Brian Wismann claimed this was because the bike had an old battery pack, with cells they’d wanted to replace but hadn’t done so during the race.  I’m wondering if he was hitting the throttle too hard.

In the first lap Shelina Moreda went sliding in the corkscrew.  The race took place at 9:30 AM, and conditions had been foggy just a few minutes earlier, with the fog lifting just before the race.  Apparently the track was a bit wet/damp still, and she lost traction in the middle of the corkscrew.   The corkscrew is a blind turn, where you’re racing up-hill, take a small turn at the top of the hill, and then you’re on a downslope that’s supposed to be like going down a cliff, but there’s a few turns to negotiate along the way.  Jeremiah Johnson was just behind her and Ted Rich, and had a good look at what happened after Moreda went tumbling.  Ted Rich was just behind her, and as Johnson crested the hill to enter the corkscrew he saw Ted Rich impacting Shelina’s bike, which was already sliding into the dirt.

That took out two riders – Moreda and Rich, who were part of the trio that was going to be contesting 3rd place.  Moreda’s bike was scraped up pretty bad on the left side, and her leathers were muddied, but both her and Ted Rich were fine.  Rich even raced in the AMA Superbike race shortly later.

The next to get knocked out was Brandon Miller.  He’d not been allowed to take the warmup lap because of some mechanical problems due to a mishap in the paddock.  He was able to start the race, and completed 1 lap doing really good, but in turn 3 of the 2nd lap the bike slid out from under him, for unknown reasons, and he ended up in the dirt banging up a lot of parts on his bike.

Everyone else rode fine and made it home. 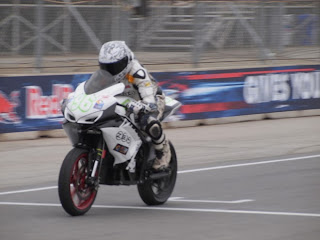 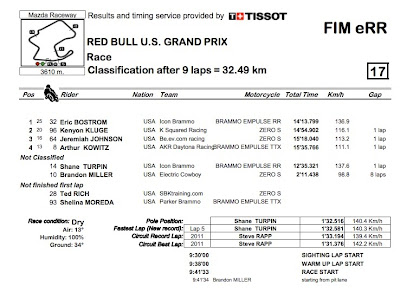