car.  Okay, it’s got a gasoline engine in it so why are we covering this on ElectricRaceNews?  It’s because of the hybrid half of the machine, with Supercapacitors boosting its performance and enabling the TS030 to perform so well against Audi hybrid race cars during the 2012 World Endurance Championship season

.  Both these cars use electrification to boost performance enough to convincingly win races.  While they aren’t pure electric race cars, they are an encroachment of electrification into what had been a purely internal combustion engine world. 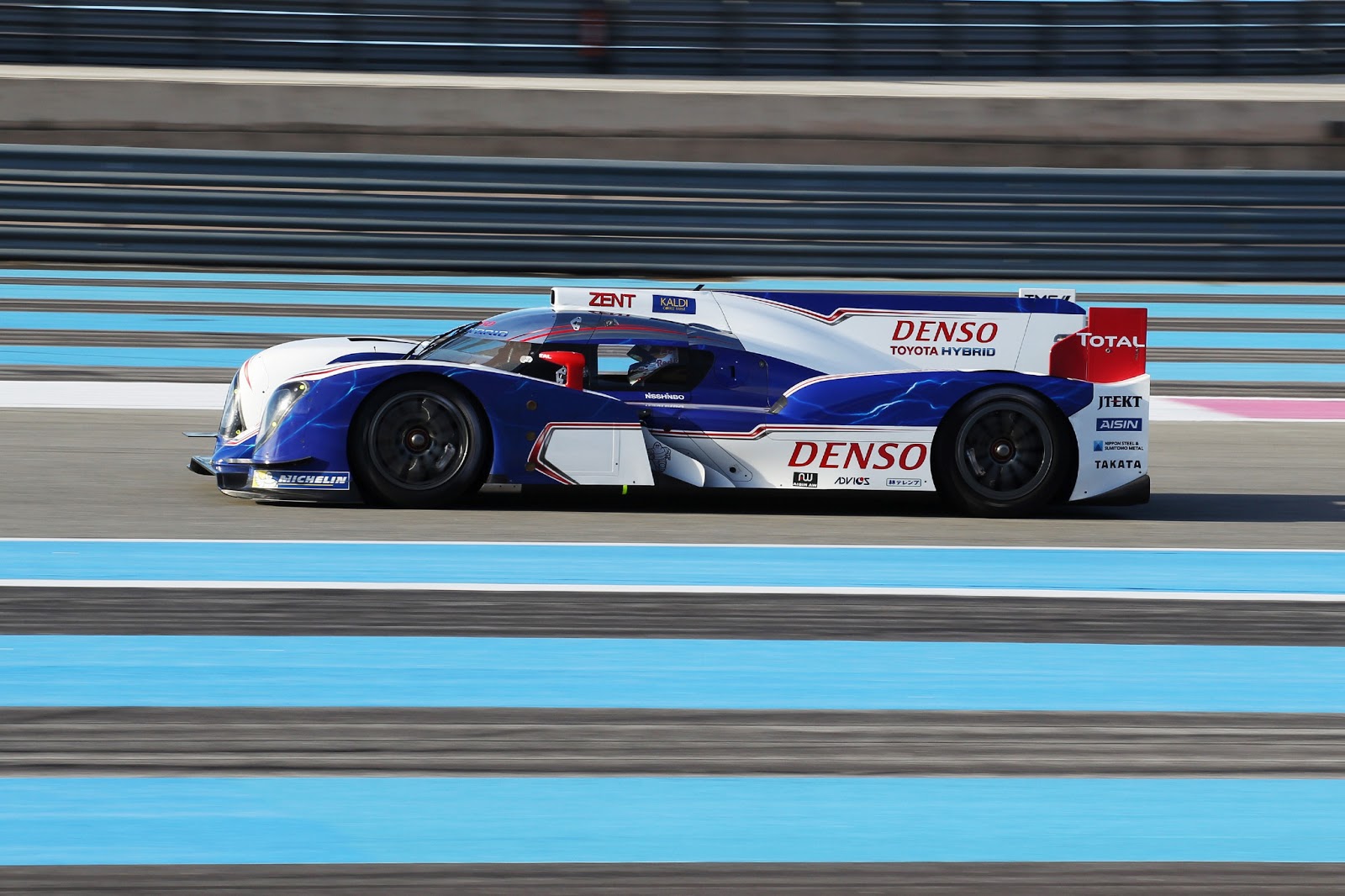 Toyota is planning to test the TS030 Hybrid race car at the Paul Ricard track in southern France on Wednesday 20 Feb 2013.

2012 was the debut season for Toyota’s hybrid race car, and it was a powerful showing.  The team raced only part of the season but had three wins in six races, and achieved podium finishes in most of the others. 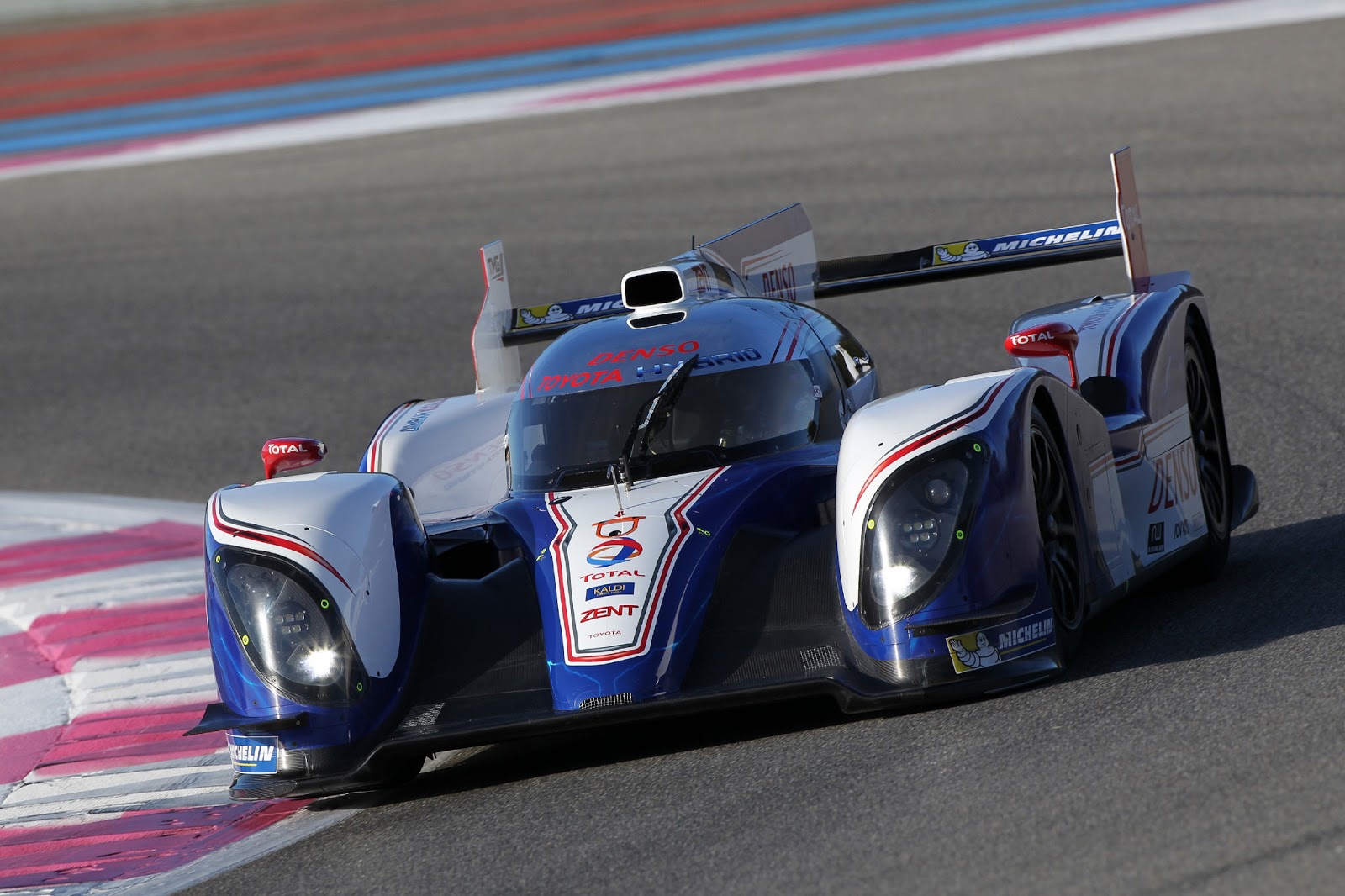 In the 2013 season the team roster is:  Alex Wurz, Nicolas Lapierre and Kazuki Nakajima team up again in the #7 TS030 HYBRID. The #8 will compete outside of Le Mans for the first time, with Anthony Davidson, Stéphane Sarrazin, and Sébastien Buemi driving.

The cars will again use the TOYOTA HYBRID System – Racing powertrain, developed exclusively for motorsport by TOYOTA’s Motor Sport Division in Higashifuji. 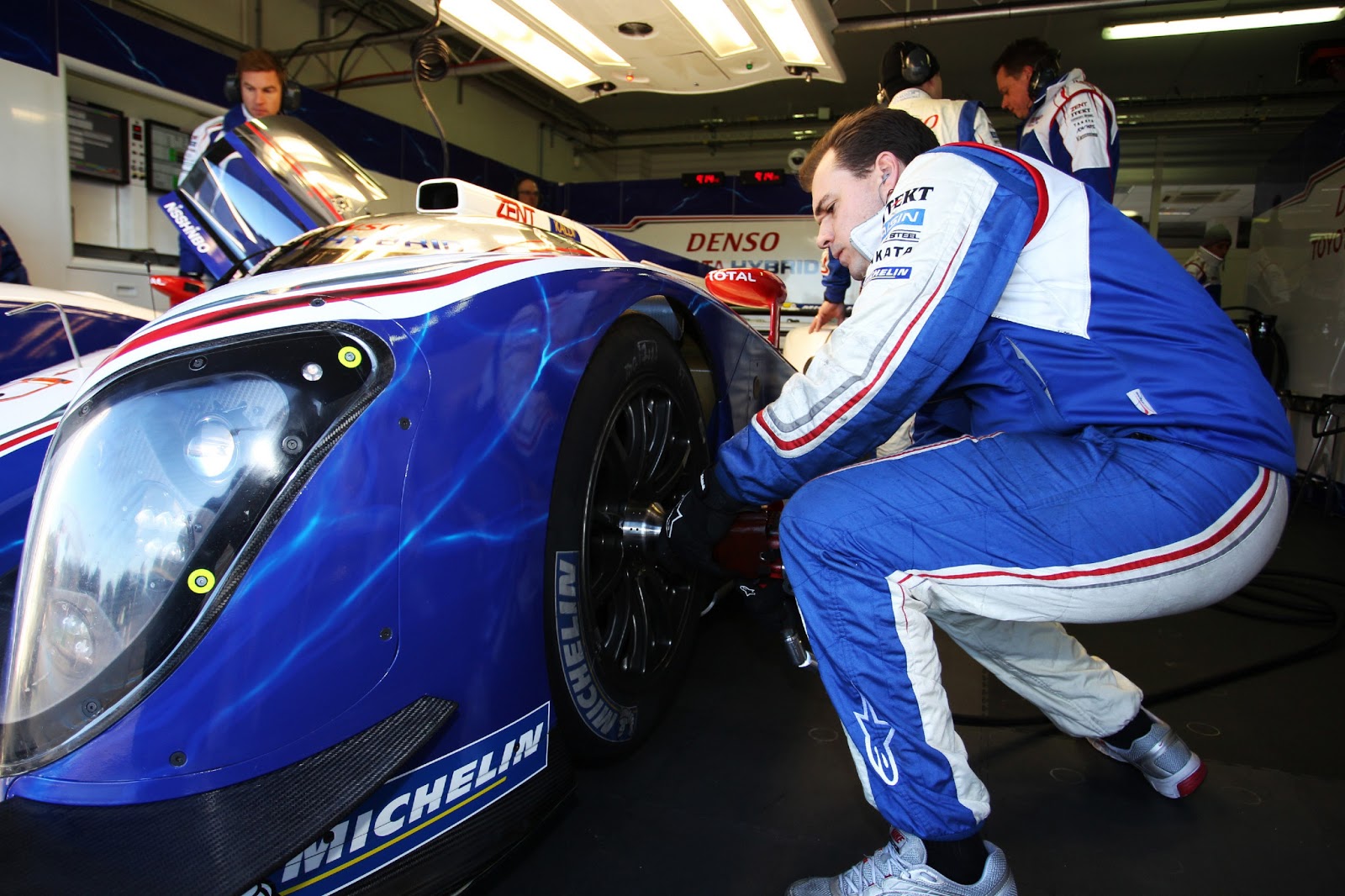 The super capacitor-based hybrid system delivers 300hp of boost automatically, on top of the 530hp generated by a 3.4litre, normally-aspirated V8 petrol engine.  The chassis has also been modified for the upcoming season, with increased performance, reliability and serviceability the priorities.  A revised aerodynamic package, including an updated monocoque, will deliver improved performance whilst minimising the impact of updated regulations in 2013 which increase the minimum weight for manufacturer LMP1 cars by 15kg.

The following are statements from team members.  At the bottom are specs published on their website. 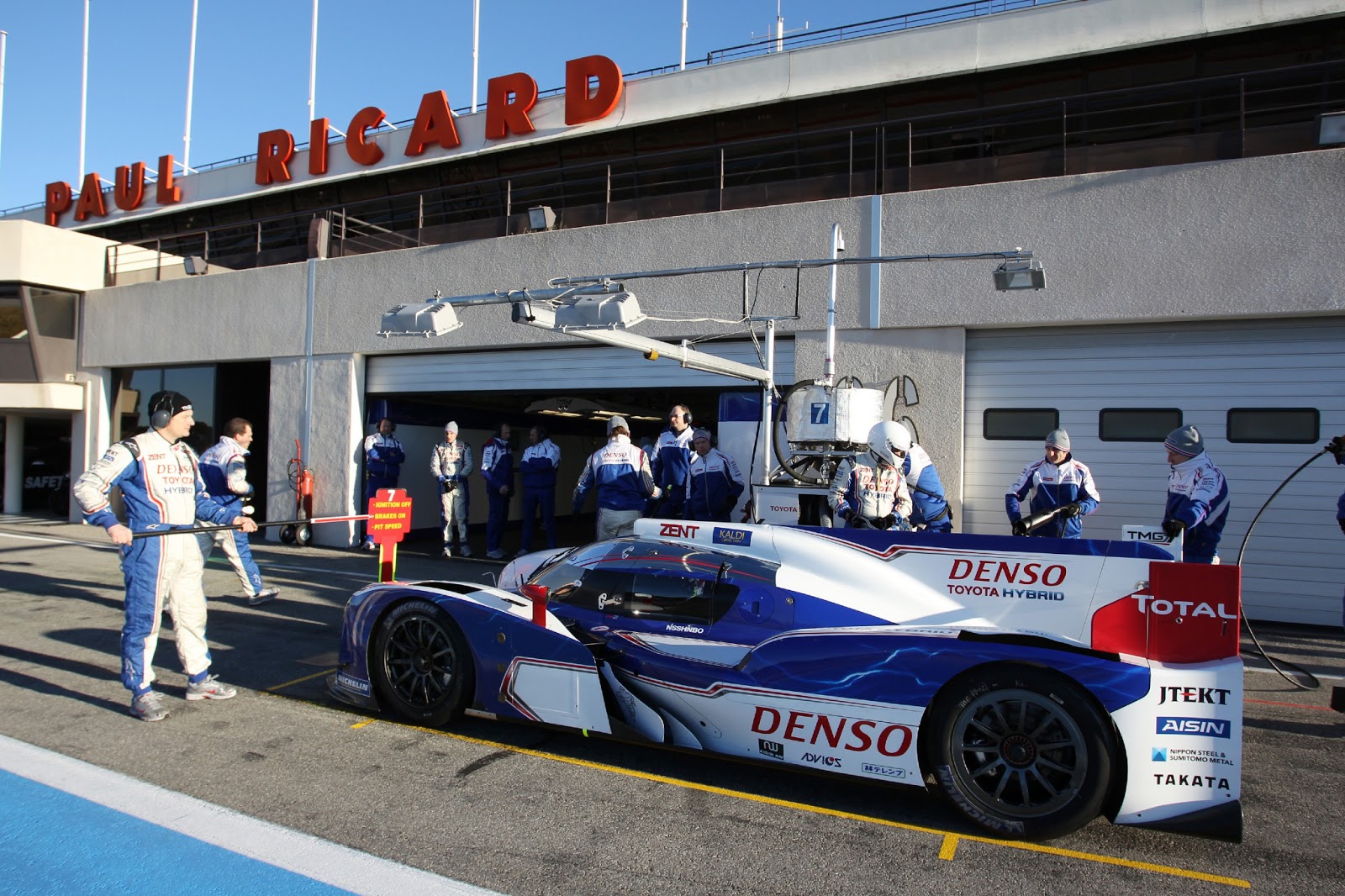 Yoshiaki Kinoshita, Team President:
What are your feelings ahead of TOYOTA Racing’s second season in WEC? I am very excited by the new season and I cannot wait for it to start. We achieved more than we expected in 2012 but this only motivates us to push harder and enjoy more success. I am eager to see how the updated TS030 HYBRID performs in race conditions and it’s normal to also be a little tense before a season starts. We are competing against very tough opposition and we knew from the start of this project that we have to perform at our top level to achieve our goals. We believe we have made strong progress with the car but we will not know if it is enough until the chequered flag falls at Le Mans. My dream is to see a TS030 HYBRID crossing the line first.

Is it realistic to think about the Le Mans and WEC titles? We took three out of six WEC races in 2012, and led Le Mans as well, so we showed not only potential, but solid results too. As a team we made big progress last year; we are still developing as a team but we can be proud of our hard work and fast learning. I believe it is realistic to target both titles but it will certainly not be easy; clearly we face an extremely strong competitor. It is a big challenge to become number one. We have huge respect for Audi’s achievements and abilities, so we expect an exciting competition in WEC this year.

Have you enjoyed your return to endurance racing? Personally I have many memories of endurance racing, particularly of being engine engineer on the TS010 in 1992 when we finished first at Monza and second at Le Mans. So it was good to be back in the world of endurance racing last year. We enjoyed the competition and the atmosphere in the paddock, plus some fantastic race weekends in front of great crowds. I’m looking forward to more of the same this year. 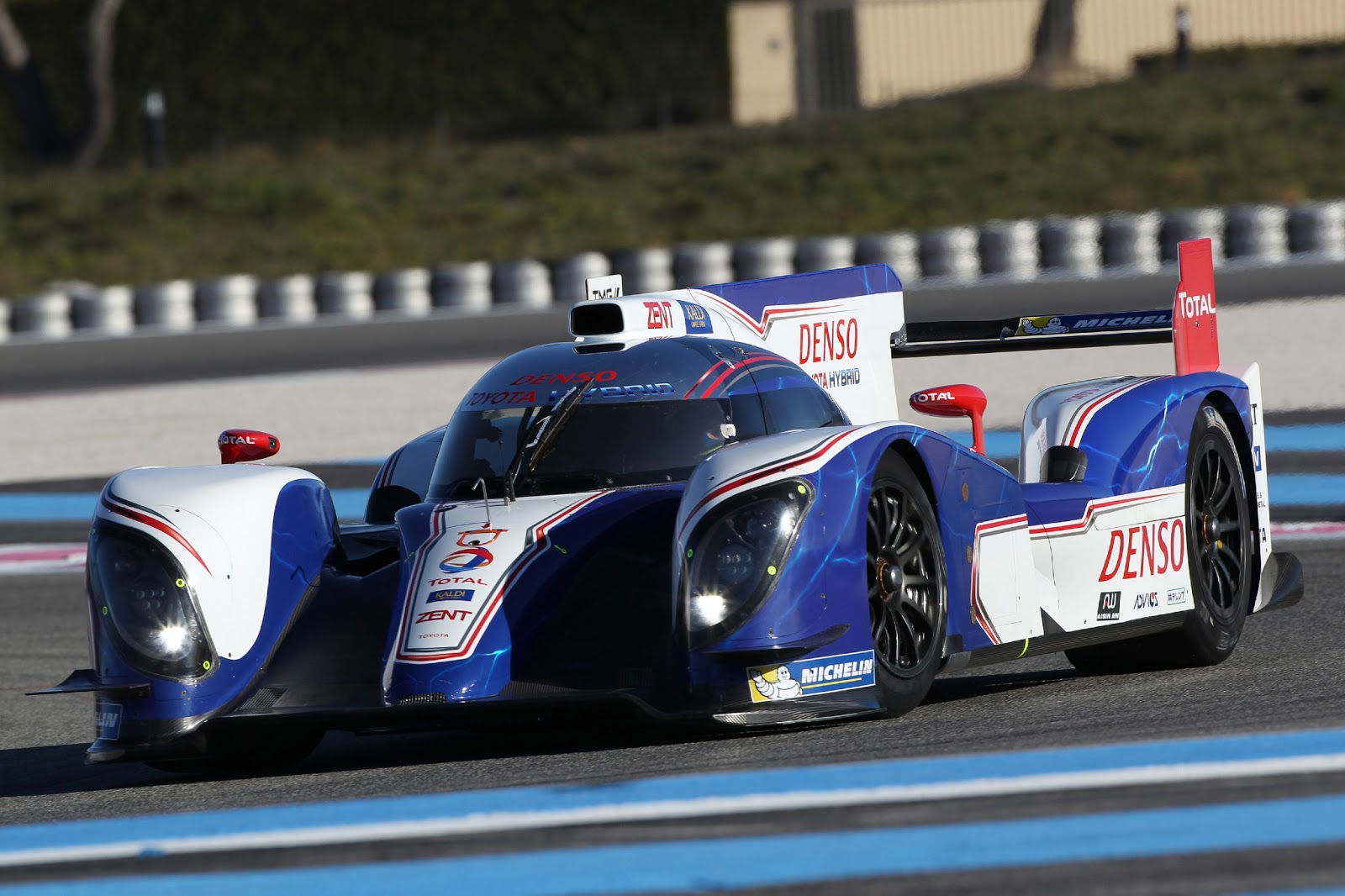 Pascal Vasselon, Technical Director:
How significant is the update to the TS030 HYBRID? There is a major regulation change in 2014 so this year’s car has to be an evolution of our initial concept. The obvious target is to fix all the little issues we have found during the last season. The very first one is that the 2012 car, being a laboratory car, was able to accept front and rear hybrid systems, so we have redesigned the monocoque to optimize it without the front motor. Last year’s performance was very satisfying and we felt we ticked most boxes so there has been no concept change, just refinement and optimization of the 2012 car.

What was the reason to retain all six drivers? We thoroughly enjoyed working with Alex, Nicolas, Kazuki, Anthony, Stéphane and Sébastien in 2012 and their performances more than justified our choice. Retaining the same drivers was an easy choice. As well as showing impressive speed and great team spirit, they all contributed to developing the car and team during our first season. With a limited testing programme, their experience and dedication was a major factor in helping us win races in our first season of WEC. We cannot imagine a stronger driver line-up with which to approach next season.

Rob Leupen, Director Business Operations:
What was the most satisfying aspect of 2012 for you?  The development of the team as a unit was impressive. When we started the project we brought together staff from TMG, Motor Sport Division and ORECA – people from different cultures and with different types of experience. Very quickly we saw the group come together as a team, working together to solve problems and increase our performance level. Thanks to the positive approach and dedication of all team members and partners, we have taken a big step towards maturity in endurance racing. We still have work to do and lessons to learn, but the last year has shown how quickly this team can progress.

What are your ambitions for 2013? We are motivated by winning so our ambition is to win Le Mans for the first time and to win our first FIA World Championship title since the World Rally Championship in 1999. But away from our on-track ambitions, I also hope to see the WEC go from strength to strength. Last year was a very encouraging first season back for the WEC and in particular I was impressed with the large, enthusiastic crowds we saw at venues like Fuji Speedway and Interlagos. We are part of an ambitious championship which has the potential to grow significantly as fans become familiar with the great racing, friendly atmosphere and technical innovation which are the hallmarks of WEC.

Hisatake Murata, Hybrid Project Leader:
How do you evaluate the performance of the TOYOTA Hybrid System – Racing in 2012? It was a great experience for me simply to see this powertrain driving a TOYOTA LMP1 car for the first time and since that moment the story got better and better. Our system performed exceptionally well and clearly demonstrated the additional performance it is possible to generate via a hybrid system. I am very proud of the engineers, technicians and partners who developed and mastered this advanced technology; their hard work really paid off. Our reward was more than winning races; it was constantly motivating for us to hear the positive comments from the drivers about the extra 300hp hybrid boost and to watch them use this to their advantage on the track.

What has changed on the TOYOTA HYBRID System – Racing? The major milestones in development of our hybrid system are 2012, when it was integrated into the TS030 HYBRID for the first time, and 2014, when the technical regulations change significantly. For this year we have achieved some incremental improvements while including some pre-testing of 2014 technologies. We have polished up things like power and efficiency whilst also fine-tuning the powertrain to enhance reliability. Overall we are confident we again have a very competitive and reliable powertrain.

John Litjens, Project Leader Chassis:
How do you evaluate the performance of the TS030 HYBRID in 2012? We were very pleased with how the car performed last year. When we started the design process we had three priorities: integrating the hybrid system, aerodynamic efficiency and tyre management. Over the course of the season our car showed itself to be very strong in all three areas so we hit our targets for our first season. Nevertheless, we found many small areas for improvement during the season. We have prioritised the most important areas and attempted to address these with the updated specification; there is always room for improvement.

How many changes have been made for the 2013 TS030 HYBRID compared to last year’s car? We took the chance to fine-tune various aspects of the car, making an evolution of the 2012 specification rather than a new concept. We have removed the front hybrid capability, resulting in more efficient packaging and aerodynamics. This helps us to manage the 15kg minimum weight increase without compromising performance too much. Our simulations show we have made good progress in performance, and our hands-on experience suggests we have eliminated some of the serviceability issues which occasionally cost time in 2012. 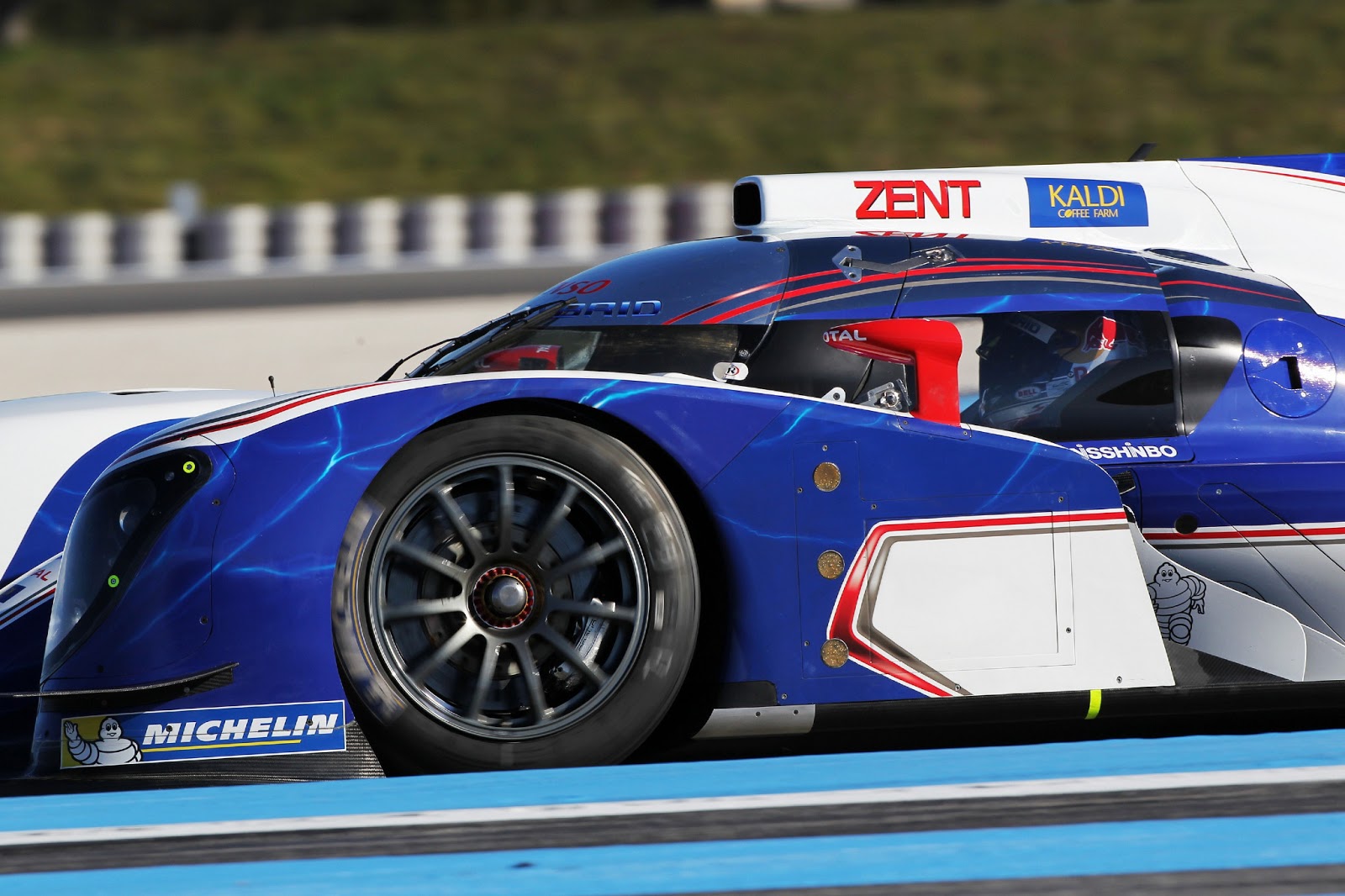