David Herron August 30, 2012 August 30, 2012Electric Cars, Tesla Model S, Tesla Motors
Since Tesla Motors has such a reputation for high powered electric cars, it must seem that the company is an obvious choice to launch an electric car racing event of some kind.  Today, Jalopnik posted an interview with Elon Musk in which he was asked almost precisely that question:

How long before we start to see electric cars in major motorsports events? What is the main technological hurdle that would need to get worked out?

His answer didn’t cover what was asked, but still managed to get the point across.  No racing for Tesla right now, but in the long run “yes”.

We could do it right now and that would be super fun, but it is more important to make compelling electric cars that people can buy. One day, we will do racing…

, but let’s take a closer look at this specific question. 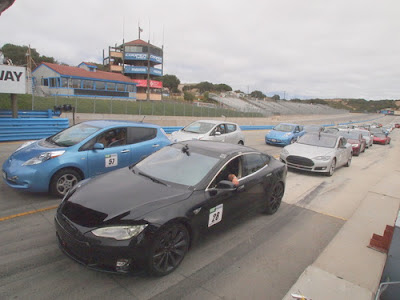 First, there have been some Tesla Motors vehicles participating in the REFUEL race over the last couple years.  This year there was 12 or more Tesla Model S’s and Roadsters in the event, and the top four finishers were driving Model S’s

While the Tesla Roadster is a very fast car, it’s been observed that car can’t maintain a high speed for very long.  One reason why the REFUEL races go for 3 laps at a time is because the Roadster’s overheat because the motor does not have cooling.  While the Model S motor does have cooling, Tesla’s goal with these cars is not to build the ultimate racing machine, but to build cars we would drive around town to go grocery shopping or typical sort of trips.

The current events are limited by battery pack capacity.  The TTXGP and e-Power events go for about 22 miles while the AMA 600cc SuperBike go for 55 miles or more.  Any electric car race would face a similar limitation – for example Lord Drayson’s car has enough capacity for about 15 minutes of racing.

On the other hand in gas vehicle racing they do stop in the pits to refuel mid-way through the race.  Hence, maybe we’re thinking about the range limit incorrectly.  If the electric race vehicles were designed to, for example, support fast swap battery packs they could race for a lot longer.  In fact Zero Motorcycles held such a race in April 2009, the 24 Hours of Electricross, which was a full 24 hour endurance race with electric motorcycles.  In that race each team was allowed three battery packs, one on the bike and two on a charger.

Fast swap battery packs have been used in racing for perhaps 20 years.    For example the original Formula E race car, built by Ely Schless, carried a battery pack of 12 Trojan 24C3 lead-acid batteries, divided into two units of 250 lbs apiece and could be swapped in 10 seconds track-side.

Fast swap would be the electric equivalent of refueling a gas tank.