Tesla Motors’ D, and something else, causing wild-ass guesses to masquerade as news 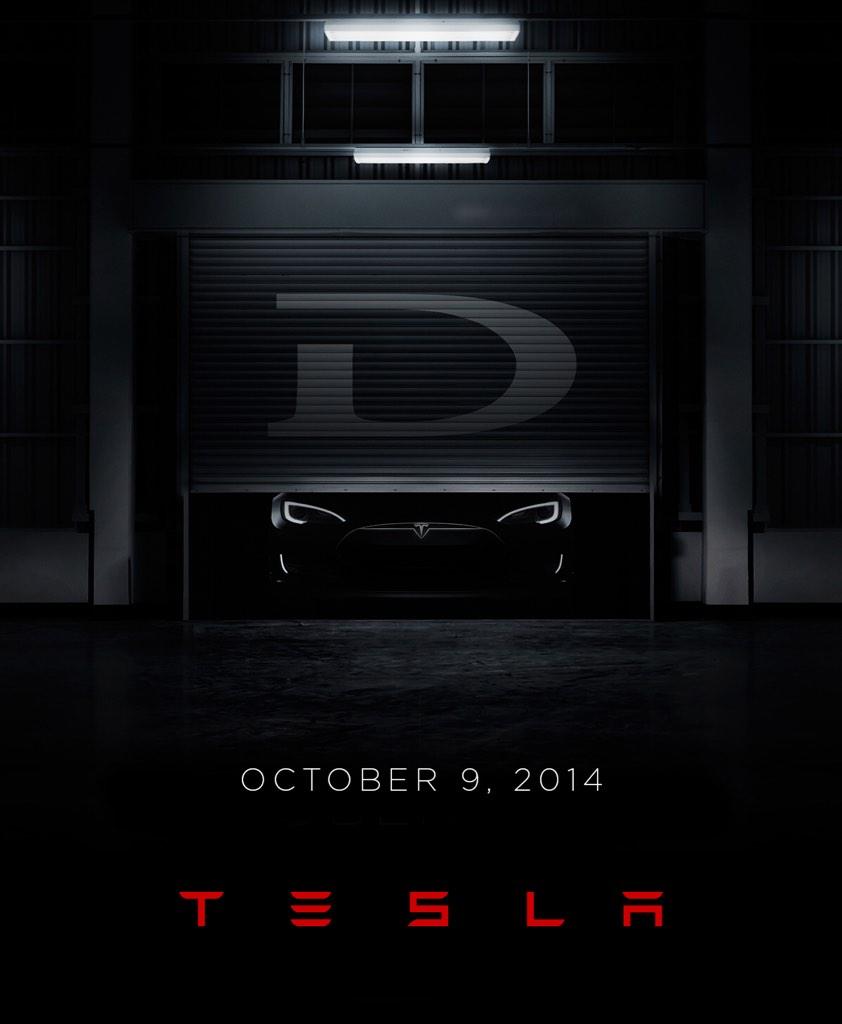 Tesla Motors CEO Elon Musk has made another of his obtuse tweets, suggesting something will be announced next week – something to do with the letter D – and something else.  Good, thank you for sharing that you’re learning the alphabet?  A bit over two years ago Elon tweeted about an upcoming announcement that will seem like alien spaceships landing at rest stops.  That turned out to be the Supercharger system, but you wouldn’t have been able to guess from the tweet.  A tweet saying “About time to unveil the D and something else

,” well, okay, this being Elon Musk I’m sure it’s going to be interesting (or I wouldn’t be writing this blog posting) but I’m content to wait until Oct 9 rather than leaping to conclusions.

The image – shown here to the right, is too indistinct to say anything more than “gosh, that’s a Model S front end.”

Using my power of deduction I’m guessing this has to do with product changes or updates on the Tesla Model S.  That car has been on sale since July 2012, and if this were a normal car company the 2015 Model S would be getting announced about now.

All the other car companies roll out product updates on a year-year basis, with next years model starting to be shown in the Fall – ergo, about now.   Tesla’s policy seems to not be to roll out new model years, but to go ahead and integrate product changes on an iterative fashion.

For example, the other day I wrote some forum discussion noting that Tesla has started shipping Driver Assist features in the Model S.  No fanfare, just new features.  Not just any old new features, but long-awaited driver assist features that were glaringly missing compared to other luxury cars.

It seems the Press is jumping on the idea that Tesla is going to be announcing a new car design.  For example, the Albuquerque Business Journal speculated this is the car for which the Gigafactory is being built

.  Uh, sorry ABJ but this just made you look bad.

Tesla’s next car design for which the Gigafactory is being built has already been discussed – the Tesla Model 3.  That model is already associated with a letter, ‘E’ so that Tesla can sell S and E and X.  In other words, whatever the ‘D’ thing refers to it’s not the Model 3.

On the other hand there is this issue of the driver assist features that have quietly begun shipping.  Tesla Motors is unlikely to let that happen without some kind of announcement.  This is a major hole in the Model S (and Model X) product features.  It turns out there’s plenty of people who’ve been holding off on ordering a Model S because of those missing driver assist features.  Hence, Tesla probably needs a big announcement so to reach those people waiting on this feature.

And, the letter ‘D’ can be associated with the Model S in the same way the letter ‘P’ is.  The fully loaded Model S is the P85+ where ‘P’ means Performance, the ‘+’ means even more performance, and the 85 means an 85 kilowatt-hour battery pack.  That adds up to a lotta dollars on the purchase price, but it is also the pattern of associating a letter with the car model name.  In the same way a Model S D85 would be an 85 kilowatt-hour model with driver assist features.

It might also stand for Dual Motor.  The Model X is based on the same underpinnings as the Model S, and will be sold with a dual motor option for all wheel drive.  Could the redesigned factory layout, preparing for Model X production, have allowed Tesla Motors to develop a dual motor variant of the Model S?

Maybe, but I’m still leaning to the driver assist features.  That Tesla has added that feature is actually pretty big news, and needs more attention than they’ve given it.

Over on Gas2.0 they are somewhat more-informed in their speculation

(hey everyone, at this stage we’re all making it up – we won’t be able to say anything definitive until the 9th).

First, the announcement in question will be made at the Paris Auto Show.  According to Gas2.

Second, like me their opinion is this isn’t a whole new car but a variation on the Model S.  For example, an even more uber-performance model than the P85+.  One with a better air dam on the front, and some other performance tweaks.

Third, is the idea of a stretched Model S.  Tesla is already having to do something for the Chinese version to give more rear leg room.  But what about people wanting a near-limousine-sized Model S?  We are talking about the luxury car market, after all.

I’ve reviewed all the other news reporting on this and I just have to reiterate one thing.  None of us know what this D thing, or the something else, will be.  Everything you read about Tesla’s D, at this time, is sheer rampant speculation.  Some of it is so laughably off the mark that I wonder how those specific writers are able to keep holding their jobs.

Hey people, don’t trust anything on this subject until October 9, 2014, okay?