First is, there are only two Zero bikes unlike the previous TTXGP races that have had four Zero’s apiece.  However, the FIM enforces a rule that disqualifies bikes which are too slow.  Because the stock Zero S maxes out at 88 miles/hr, they’ll almost certainly be disqualified.  As I noted a couple weeks ago, that fact is to me a major problem with the TTXGP

which I think should be addressed by next season.
The other interesting bit about the Zero lineup is Ted Rich.  He has ridden for Lightning Motorcycles, and helped them develop and test the bikes.
There is a new name for the Team Icon Brammo lineup, Eric Bostrom.  The press release for this is pasted in below.  There had been rumors that Shelina Moreda would become Brammo’s second rider, but this appears to not be the case.
Lightning Motorcycles has two bikes again, this time their second rider is Tom Montano.  He is a top AMA Pro racer, and also rode the Mission Motors entry in the 2009 TTXGP on the Isle of Man.
What’s not shown in this lineup is that Lightning Motorcycles superbikes will be wearing new colors due to a collaboration with Barracuda Networks.  Additionally the Lightning paddock will be powered by a pair of trailer-mounted solar panel array’s for true zero emissions racing 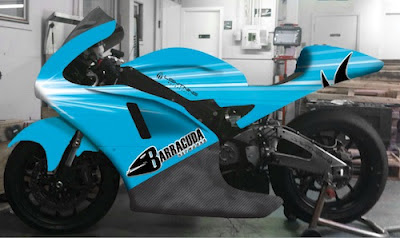 Jeremiah Johnson is on the roster again, and it appears this time he’ll actually be participating.  I see a posting from him on Facebook saying he’s at the registration hotel in Monterey, getting ready to go to the track.  He showed up at the first TTXGP event in North America, during 2009 at the Vintage Motorcycle Days in Ohio, and suggested he would be racing in the TTXGP starting in 2010.  Okay, 2010 didn’t happen, but he’s starting his participation in 2012.
That Münch Racing is bringing two bikes is interesting, if only because of the distance they are traveling.  In the 2010 and 2011 Laguna Seca races they brought only one bike, despite racing with multiple bikes in Europe.
The last team is Proto Moto, which is a one-man show run by Ely Schless, a guy with a couple decades or more of experience in electric racing.
By the way it is only the two Münch Racing bikes which will be any representation of the e-Power series, all of the remaining teams are participants in the North America TTXGP series.  Officially speaking the event is a FIM e-Power race, and the TTXGP is simply invited to participate in a form of collaboration.  Effectively, however, this is a TTXGP race because every team participates in TTXGP races, and only one of the teams (Münch Racing) also races in e-Power.
Team Icon Brammo Adds Legendary Motorcycle Rider Eric Bostrom to Roster
ASHLAND, Ore.; July 26, 2012 – Further solidifying Brammo’s leading role in the electric vehicle racing space, Brammo, Inc. announced today Eric Bostrom will be joining Steve Atlas as a rider for the world-famous Team Icon Brammo.
Bostrom joins Team Icon Brammo with over two decades of experience riding for companies such as Ducati, Harley Davidson Honda, Kawasaki and Suzuki. As Brammo racers, Atlas and Bostrom will provide instrumental feedback on Brammo’s racing bike, the Brammo Empulse RR, while promoting Brammo as the leading electric two-wheel vehicle brand.
“Team Icon Brammo is excited to add a rider of Eric’s caliber to our team headed into the most important race weekend of the season, the TTXGP North America Championship 2012 at Mazda Raceway Laguna Seca,” said Brian Wismann, Director of Product Development for Brammo and Manager of Team Icon Brammo. “Eric’s insight and experience will be an instrumental resource in continuing to develop the promising potential of electric motorcycle technology.”
Brammo is leading in the development and production of electric motorcycles, largely thanks to insights weaned from Team Icon Brammo. In 2009, Brammo competed in the first ever TTXGP race and finished as the top American team. Since then, racing has been core to the development of Brammo’s consumer and racing motorcycles, including the Empulse R, which is the world’s fastest production electric motorcycle for consumers. Further elevating their rich racing history, Brammo won the 2011 TTXGP North American Championship, with the Empulse RR and rider Steve Atlas.
“As I’ve always said, I have a love for all things on two wheels. Since my departure from Superbike competition, I’ve been competing in bicycle racing which has sparked my growing compassion for green power,” said Bostrom. “Having ridden both Brammo’s street and race models, the progress electric bikes have made in their short existence is nothing short of phenomenal. Our quest to develop the best bikes of tomorrow is off and to the races, and leaving a smaller footprint along the way.”
About Brammo
Brammo, Inc., is a leading electric vehicle technology company headquartered in North America. Brammo designs and develops electric vehicles including the Encite™, Enertia™, Empulse™ and Engage™ motorcycles. Brammo is the current TTXGP eGrandPrix champion of North America. Brammo is an OEM supplier of its innovative Brammo Digital Drivetrain™ systems including the Brammo Power™ battery pack and Brammo Power™ vehicle management system. Brammo has vehicle distribution and marketing operations in North America, Europe and Asia. To learn more, visit www.Brammo.com